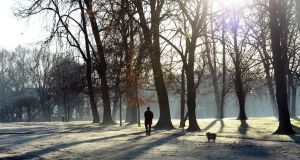 A cold snap is on the way for the bank holiday weekend, with low temperatures and frost expected in places at night.

Friday is forecast to be a showery and cold day, with temperatures in most places to be less than seven degrees. Northerly winds along the Atlantic coast will make it colder still, with showers to be heaviest in Connacht, Ulster, and west Munster.

Met Éireann has said there will also be a chance of hail and thunder in parts of the country.

On Friday night temperatures will hit zero degrees in places, with frost and icy patches expected. The national forecaster has said there is a chance of slight snow on northern hills and high ground.

Rain will continue to be heaviest in Ulster and Connacht overnight, with hail and thunder likely. Most of Leinster is expected to be drier over Friday night, with clear spells over east Munster as well.

The weather for Saturday will be cold and windy, with the parts of the south and east getting clearer skies and some sunny spells in between scattered rain showers.

The rest of the country will see heavy and prolonged rain, with hail and thunder also possible. Top temperatures over the day will be between six and eight degrees.

Temperatures will drop to as low as minus three degrees Friday night, with widespread frost and ice expected. However, heavy rain will be limited to areas along the coasts.

On Sunday the weather will pick up, with most parts of the country seeing dry conditions and some sunshine.

The Dublin City Marathon will take place in the city on Sunday, starting at 8.55am. The route will run from the city centre, through Phoenix Park, and around to University College Dublin, before finishing back by Merrion Square. There will be rolling road closures along the route to facilitate the marathon.

Highest temperatures will range from seven to 10 degrees, but Sunday will feel warmer than previous days, as the cold northerly winds ease off. Met Éireann said temperatures would drop quickly after dark, to as low as minus two degrees overnight.

The outlook for the bank holiday Monday is for a frosty morning, which will clear into a dry and bright day. There will be some cold breezes and mists along the Atlantic coast, with risks of light rain.

Overall temperatures will hit up to 10 degrees, and “moderate to fresh” winds are forecast, with Monday night to be dry in most parts of the country.