Under proposed directive, items such as straws, swabs, plates and cutlery would be banned by 2021 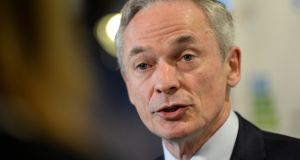 Richard Bruton: the Minister is to review the deposit and return scheme to “ensure we better understand the impacts of introducing such a scheme on top of the existing successful collection system”. Photograph: Eric Luke

Minister for Climate Action and Environment Richard Bruton has welcomed an overwhelming vote in the European Parliament to introduce a ban on single-use plastics.

A spokesman said the Minister was “fully supportive of the EU Commission’s proposal for a directive to manage with single-use plastic waste, and will work with environment ministers across Europe to see these proposals enacted into law”.

Representatives of EU national governments are due to meet on Monday to agree on their joint position, and the three-way negotiations between governments, the European Parliament and the European Commission are scheduled for November 9th in advance of an environment council when sign-off may occur.

The ban could be enshrined in EU law by the end of the year, according to sources in Brussels and Ireland.

It has immense implications for product manufacturers and retailers – and is separate to moves by governments to ban microplastics and the phasing out of plastic packaging where possible by leading brands and supermarkets.

Under the proposed directive, items such as plastic straws, cotton swabs, disposable plastic plates and cutlery would be banned by 2021, and 90 per cent of plastic bottle recycled by 2025. It proposes that caps be attached to the bottles to reduce litter. It includes targets for reducing the use of certain plastics and obligations for producers to cover costs of waste management and clean up.

Described by the European Commission as a clampdown on “the top 10 plastic products that most often end up in the ocean”, it targets lightweight single-use items that can easily travel long distances, absorbing toxins along the way that damage marine flora and fauna.

Voice Ireland said a ban targets the most problematic throwaway products, such as expanded polystyrene food containers, and ensures producers are held accountable for the costs of single-use plastic pollution. For fishing gear, one of the largest contributors to marine litter, harmonised standards will be developed and minimum collection and recycling targets will be set at the EU level.

Voice co-ordinator Mindy O’Brien said: “I hope this [vote on Wednesday] will be the push we need for Irish Government to take action on plastics too.”

She was critical of some Fine Gael MEPs who did not support strong “polluter pays” provisions in the directive, and noted the contents of a leaked letter recently that exposed how major plastic polluters such as Coca-Cola, Nestlé, PepsiCo and Danone were lobbying national environment ministers to water down the directive.

Green Party leader Eamon Ryan said he was delighted by the vote but regretted “Fine Gael are still dragging their heels and blocking the same sensible legislation here at home. We have a Bill that would put us ahead of the curve on this, but the Government continues to use delay tactics. They need to issue the money message that would allow us to move forward with our Waste Reduction Bill.”

The 2107 Waste Reduction Bill, which proposes an Irish ban on single-use plastics, and a deposit and return scheme (DRS) on plastic bottles and aluminium cans, has passed initial stages in the Oireachtas.

But Mr Bruton said this week he was to review the implications of the DRS to “ensure we better understand the impacts of introducing such a scheme on top of the existing successful collection system”.

The Government abstained on a Private Members’ Motion tabled by the Green Party to speed up the processing of the legislation but absence of a Government “money order” attached to the Bill, in effect, has stalled its passage.