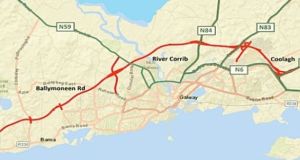 The route of the proposed €600 million Galway city ring road.

First stages have been taken in the planning application for a €600 million ring road for Galway.

The application is being made to An Bord Pleanála under strategic infrastructure legislation.

Up to 1,350 letters are being posted out to notify Galway property and home owners on or close to the preferred route and access points. However, up 450 of these recipients own land or property which may have to be acquired under compulsory purchase order.

The Cabinet approved funding for the project earlier this month, subject to planning approval.

In total 44 houses will have to be demolished and another 10 more acquired to facilitate the ring road, which aims to link the east and west of the city.

The proposed route involves a new bridge and viaduct over the river Corrib, and two short tunnels on the city’s east side.

The 18km (11 mile) link comprises a 6km long single carriageway west of Barna and continues via Ballymoneen Road in Knocknacarra to Letteragh, where it has been designed as a dual carriageway.

The 12km dual carriageway section then runs through Dangan sports facilities at NUI Galway (NUIG). It crosses the river 200m south of Menlo Castle, with the first of two tunnels about 230m in length under the candidate Lough Corrib special area of conservation at Lackagh quarry (Coolagh) on the Headford road.

Galway County Council has submitted an environmental impact assessment report and a Natura impact statement to An Bord Pleanála under strategic infrastructure legislation. Submissions can be made until December 21st, and an oral hearing is expected in the new year.

She has questioned the justification for spending €30 million per kilometre on a road when the Government is failing to take sufficient mitigation measures relating to climate change.