But a lot of ‘heavy lifting’ is being postponed to 2025-2030, according to climatologist 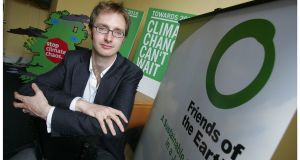 Oisín Coghlan, director Friends of the Earth, says: ‘This is by far the strongest programme for government on climate action we have ever seen.’ Photograph: Alan Betson

The programme for government may be imperfect but is the best option ever to drive down carbon emissions in Ireland with urgency, according to Friends of the Earth director Oisín Coghlan – a leading figure in the Irish climate movement.

Addressing those who have their doubts – “whatever party they’re in or of no party” – he asked: “What is their alternative path to a parliamentary majority that will deliver faster and fair climate action?”

While the climate movement in Ireland has never been stronger, the three parties together have the ability to pass laws and make government policy to drive down emissions, Mr Coghlan said.

“This is by far the strongest programme for government on climate action we have ever seen. Is it perfect? No. Is it everything we need to do? No. But it can put Ireland on the path to implementing the Paris Agreement.”

The commitment to an average 7 per cent annual reduction in polluting emissions was a huge step forward, he said.

“And crucially, a new climate law will translate that 7 per cent target into legally-binding five-year carbon budgets, which will specify a limit on how much pollution each sector can emit. There will also be new powers for independent experts and the Oireachtas to advise the Government and hold ministers and civil servants to account.

“The programme is very good on transport, retrofitting and renewables – with real progress community energy and rooftop solar. It is weaker on concrete measures to reduce agricultural pollution and on a date for the end of coal and peat burning for electricity,” he said.

Stop Climate Chaos (SCC) welcomed the programme as “a major advance in Irish climate policy” – it is made up of a large coalition of climate, environmental and aid organisations which are apolitical but its analysis would carry particular weight with Green Party members.

If fully implemented, it said Ireland would finally lose the status of laggard, “as we become one of the first countries in the world to commit to leaving fossil fuels in the ground by banning offshore oil and gas exploration”.

SCC spokeswoman Sadhbh O’Neill said it was essential that the proposed climate change amendment bill was progressed through the Oireachtas as quickly as possible so carbon budgets for 2021-2025 and 2026-2030, to be devised by a strengthened Climate Change Advisory Council, are adopted together before the end of 2020.

She added: “If this is not carried out as a matter of urgency, precious time will be wasted, and opportunities for emissions reduction will be missed. Setting targets that are in line with science means there is absolutely no time to waste.”

The proposed climate legislation will also strengthen the scientific basis for climate policy by including climate scientists and a gender balance in the membership of the Climate Change Advisory Council. This would be crucial it will be responsible for devising carbon budgets to include all sectors, including agriculture, she said.

However, the coalition expressed concern the programme “lacked firm commitments to reverse the increase in methane and nitrous oxide emissions within the [AGRICULTURE ]sector, or offer any tangible commitments to move away from intensification”.

Climatologist Prof John Sweeney was less positive about the deal, saying that concentrating climate actions on the second half of the coming decade rather than in the lifetime of the in-coming government was not in Ireland’s best interests.

A lot of “heavy lifting” was being postponed to 2025-2030, which was essentially leaving it “for the next government to worry about”, Prof Sweeney of Maynooth University said.

In that scenario, if necessary reductions in emissions were not achieved, it may require harsher actions on consumers and the economy to be pursued, he believed – such as higher carbon taxes, climate “quotas” and restrictions on diesel and petrol cars.

Prof Sweeney stressed, however, if policies included in the programme were implemented fully they would have a great impact, and Ireland could become a climate leader in Europe.

There was a need for more clarity between what was planned for 2020 to 2025 and the subsequent five-year period, he said, adding action was needed now particularly in the area of agriculture. Farmers should grasp the programme for government “as quickly as they can because they are getting a lot.”

“There is unlikely to be any scenario whereby – without an absolute reduction in Irish methane emissions – the end product will be compatible with the 7 per cent emissions reductions target.”

Reductions due to take place in the first five-year carbon budget, might not be “fully realised” until the following five-year budget, he added.

This would leave what he termed “a legacy” to the next government, rather than achieving the necessary reductions during the next Government’s term through methods such as reduction in livestock numbers.

“Backloading the 7 per cent commitment to the second half of this decade is not good and runs the risk of repeating the experience of the past, when aspirations and commitments were not realised.”

Prof Sweeney said these problems were “compounded by the delay” in quantifying annual emissions figures. He said the only statistics currently available were from 2018 – so the 2025 performance will only be available in 2027.