Six-week hosepipe ban to come into force from Tuesday 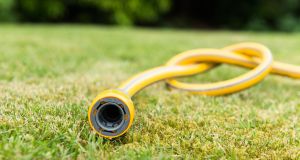 Households found to be in breach of the ban can be fined €125. Photograph: iStock

Irish Water is to introduce a nationwide hosepipe ban from Tuesday to combat the effects of widespread drought on the country’s water supply.

The ban will prohibit people from using garden hosepipes for non-essential purposes such as watering plants, filling paddling pools, garden water fountains, or washing cars and other vehicles.

The national water utility warned last week that a hosepipe ban, officially known as a water conservation order, was likely due to the prolonged period of dry, sunny weather.

The hosepipe ban will apply for an initial six-week period from Tuesday until midnight on July 21st, unless it is extended further. Households found to be in breach of the ban can be fined €125.

Irish Water has said 27 of its drinking water schemes are now at drought levels, with a further 50 at risk of drought.

This spring has been the driest on record in Dublin, Meath, Kildare, Wicklow, Sligo and Tipperary. Last month was the driest May since 1850, according to Met Éireann, leaving water reservoirs at critically low levels.

Niall Gleeson, Irish Water managing director, said the utility had to introduce the hosepipe ban as “demand continues to outstrip supply and the dry weather looks set to continue”.

“It is essential that our water supply is protected if we are to avoid restrictions and outages over the coming weeks and months,” he said.

“The key messages are to leave the hose and the pressure washer in the shed; don’t use paddling pools; reuse household water for the garden; and take shorter showers,” he said.

Irish Water last introduced a hosepipe ban in July 2018 in the greater Dublin region, before extending it nationwide. The duration of the ban was extended several times amid continued drought conditions and remained in place for Dublin and several other counties until September that year.

In recent weeks demand on the water supply for the greater Dublin region has surged during sunny days, at times nearing the utility’s maximum capacity of 615 million litres a day.

Irish Water has said it would need a minimum accumulation of 100mm of rainfall over a number of weeks, and a return to normal rainfall levels thereafter, to ease the threat to the country’s water supply.

However, Met Éireann’s forecast for the next week is for mostly dry conditions with some rain showers. Longer-term forecasts predict the drier-than-normal weather to continue over the summer.

From early May demand has been steadily increasing, with stored water levels dropping, according to internal Irish Water management reports.

Household water usage has increased during the coronavirus lockdown, with people spending more time at home, and regular handwashing advised to prevent the spread of Covid-19.

The reopening of businesses in the coming weeks is also expected to put additional pressure on the water supply.

About 40 per cent of water is also lost through leaks across the water network, which is a particular problem in Dublin, where older pipes can date to the Victorian era.

Exceptionally warm weather over the June bank holiday weekend saw an increase in demand equivalent to the daily usage of an extra 200,000 people in Dublin and surrounding counties. This increase in water usage was largely replicated across the rest of the country, Irish Water said.

“Such weather brings people into their gardens and makes the use of hoses more likely,” Mr Gleeson said.

“Similarly with children confined to home, it can be tempting to use paddling pools ... However, using a hosepipe for one hour is the equivalent of the daily water usage of an average family, and this is evidently a non-essential use of water,” he said.

Irish Water has said the conservation order prohibits the use of water drawn through a hosepipe or similar apparatus for the purpose of: