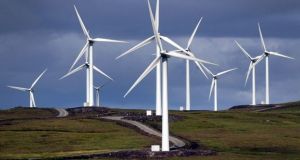 The three parties are committing to an average 7 per cent per annum reduction in overall greenhouse gas emissions from 2021 to 2030, with a shift to renewable source of energy such as wind. Photograph: Ben Curtis/PA

The draft programme for government contains a lengthy mission statement in favour of a “Green New Deal.”

Firstly, the three parties are committing to an average 7 per cent per annum reduction in overall greenhouse gas emissions from 2021 to 2030, which is a 51 per cent reduction over the decade. They also commit to achieving net zero emissions by 2050.

The 2050 target will be set in law by the Climate Action Bill which will be introduced in the Dáil within the first 100 days of government alongside a newly established Climate Action Council.

“The Bill will define how five-year carbon budgets will be set,” it says.

The “special economic and social role of agriculture and the distinct characteristics of biogenic methane...will be fully recognised in plans to achieve these targets,” the document adds.

The deal promises the delivery of a “National Aggregated Model of Retrofitting” reaching over 500,000 homes by 2030 and pledges an accelerated electrification of the transport system including electric bikes, electric vehicles and electric public transport alongside a ban on new registrations of petrol and diesel cars from 2030.

It promises a strategy for remote working and remote service delivery as well as an unprecedented modal shift in all areas by a re-orientation of investment to walking, cycling and public transport.

There will also be a “major drive to realise the immense potential of Ireland’s offshore renewables”.

The parties have agreed on a new strategy to expand afforestation and plan to “transform organic farming with delivery of a fair price for farmers at its heart.”

Every minister will be asked to make climate action a “core pillar” of their new departmental strategies, which must be produced within six months of the Government taking office.

The Government will propose that the Oireachtas establishes a standing Joint Oireachtas Committee on Climate Action, with powers similar to the Public Accounts Committee.

On energy, there will be a new National Energy Efficiency Action Plan to reduce energy use while there are also plans to complete the Celtic Interconnector to connect Ireland’s electricity grid to France.

The three parties say that they do not believe it makes sense to develop the LNG gas import terminals importing fracked gas and accordingly they will withdraw the Shannon LNG terminal from the EU Projects of Common Interest list in 2021.

There will be a policy statement to back up the Government position that it does not support the importation of fracked gas.

The Government will also phase out the use of singe use plastics and introduce a deposit and return scheme for plastic bottles and aluminium cans.

At least 500,000 homes will be retrofitted to a B2 energy rating by 2030 starting in the midlands and people will be given the option to repay retrofitting costs through their utility bills.

The parties plan to commence a targeted programme to install heat pumps in homes as part of an overall plan to install 600,000 heat pumps by 2030.

There will also be a public sector decarbonisation target of at least 50 per cent.

The new government will also establish the Just Transition Commissioner as a statutory office with appropriate staffing and resources and progress the establishment of a Citizens’ Assembly on Biodiversity.

The parties say they will retain Irish Water in public ownership as a national, standalone, regulated utility, and continue to provide a generous free allowance of water to every citizen while conducting a feasibility study examining how further assistance can be given to low income households for the installation of water efficient appliances.