Number of trees impacted by BusConnects can be reduced, NTA believes 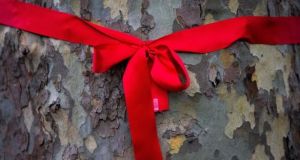 Over 1,400 properties stand to lose part of their front gardens to accommodate the proposed plans while between 1,500 and 1,600 trees would be lost. Photograph: Tom Honan/The Irish Times

The National Transport Authority (NTA) has said it believes it can reduce the number of trees that would be impacted by the BusConnects plan following local engagement.

It said there is a general sense from meetings and engagements with the public in recent months that limiting parking space is “becoming part of the conversation” along with one-way systems for private cars and traffic restrictions.

“We are open to exploring all viable and realistic options where we can get bus and cycling priority and still retain trees – these will form all part of the design work which is being carried out over the summer,” a spokeswoman for the NTA said.

BusConnects aims to overhaul the current bus system in the Dublin region by creating 230km of dedicated bus lanes and 200km of cycle tracks along 16 of the busiest corridors along with a redesign of the network.

Over 1,400 properties stand to lose part of their front gardens to accommodate the proposed plans while between 1,500 and 1,600 trees would be lost.

The NTA said following local engagement it believes it can reduce that figure, adding “we will replace more trees than we remove”.

Affected property owners are expected to receive an average compensation payment of about €25,000 while the NTA said where trees are removed “a comprehensive replanting programme” would be put in place.

In its submission to the NTA, the Irish Georgian Society asked the NTA to consider reducing access to the city centre by private cars “before considering undermining the integrity of the historic environment through the removal of historic fabric and street trees”.

The society said while it welcomes the potential of the project to “significantly improve the quality of the urban environment” it has reservations about the impact of the removal of “historic boundaries, railings, gates, pavement and street furniture on sensitive historic streets”.