Government will try to meet tough climate targets by 2030 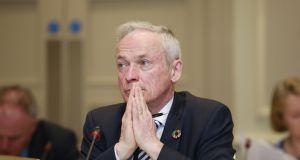 Minister for Climate Action Richard Bruton. His plan takes on board the recommendations of the all-party committee on climate action in its report earlier this year. Photograph: Nick Bradshaw

The Government plan to tackle climate disruption due to be published on Monday will set out how carbon pricing, including escalating carbon taxes, will be applied up to 2030.

The move is an attempt to prompt a major behaviour shift in fossil fuel consumption in the Irish economy. While it is politically contentious, it is only one among hundreds of climate actions in the plan that will impact on all sectors up to 2050.

A critical issue of how to make the tax progressive, that leads to benefits for the majority and protects those who are most dependent on fossil fuels, including low-income families, will be worked out in the coming months in advance of the autumn budget. Likewise, the extent to which revenues are ring-fenced for climate measures.

The report, based on a draft version seen by The Irish Times, shows the Government will attempt to meet demanding and binding EU targets by 2030. This is in spite of failure to meet 2020 targets on reducing carbon emissions and adopting renewable energy that will see the country paying recurring fines in coming years.

The new 2030 commitments are a bid to avoid even higher fines – estimated at in excess of €6 billion based on carbon price projections and continuing in a business as usual scenario. These come in the form of buying carbon credits, known as offsetting, from compliant countries.

Ireland is facing a particular challenge as it is one of the worst performing EU member states in addressing emissions. In transport and agriculture, they are rising in spite of agreeing to obligations set out in the 2015 Paris Agreement.

The plan, which has been drawn up by Minister for Climate Action and Environment Richard Bruton, takes on board the vast majority of recommendations of the all-party committee on climate action in its report published earlier this year.

It sets out major institutional reforms notably at Government department level where rigorous climate policy will apply in tandem with fiscal policy. It will be based on expanded expertise that will help set carbon budgets on a five-yearly basis.

In effect, this will set what level of emissions will be permitted for departments and State agencies, and more significantly key sectors with implementation failures subject to penalties. The Department of the Taoiseach will have a pivotal role in overseeing implementation.

The “All of Government Plan to Tackle Climate Disruption” will have most impact on transport; agriculture, energy and the built environment.

A multibillion programme to retro-fit houses to make them energy efficient will be unveiled, with low cost loans processed for householders who will be able to pay back over 20 years through their energy bills.

In agriculture, a series of decarbonisation measures set out by Teagasc will be the basis of major changes in farming including diversification away from beef and dairy and the adoption of bioenergy.

On land use, carbon sequestration is set to be scaled up through afforestation and the restoration of globally-important boglands concentrated in the midlands.

On power generation, it confirms the ending of coal and peat use by the mid 2020s, and a radical step-up of grid capacity to take 70 per cent renewables by 2030. Much of this transition will be made possible by offshore wind energy, and further expansion of onshore wind developments.

The role of the “the energy citizen” and communities availing of the opportunities from decarbonisation feature prominently. The capacity for individuals, schools, sports organisations, businesses and farmers to benefit from microregeneration is to be finally rolled out. A new feed-in tariff will apply where excess power generated locally can be fed into the grid with financial rewards.

The plan includes measures to improve electric vehicle infrastructure with a view to having 500,000 EVs in Ireland by 2030 and shift the balance from the private car to public transport and cycling.