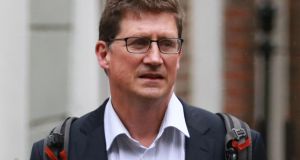 Ireland must follow the UK in committing to achieving “net-zero” carbon emissions by 2050, according to Green Party leader Eamon Ryan.

British prime minister Theresa May announced on Wednesday it is to enshrine in law a commitment to reach net zero emissions, making Britain the first major economy to do so.

That means emissions from homes, transport, farming and industry will have to be avoided completely or – in the most difficult examples – offset by planting trees or sucking CO2 out of the atmosphere.

The current Irish target is an 80 per cent reduction by mid century, though climate scientists say this is insufficient to keep global temperature rises to within 2 degrees as envisaged under the Paris Agreement.

Moving to net-zero would be a climate action “beyond compare” in terms of scale and cost, Mr Ryan said, “but it has be done. We have to match it. We don’t want to fall behind and miss the economic opportunities that will come with it”.

There was also, however, a need for honesty with people on what is required to actually meet such a commitment, he added, as it would require nothing short of systemic change.

He had reservations that the National Development Plan as currently costed, did not fully reflect what was required in terms of achieving net-zero emissions in less than three decades. This was indicated by insufficient money being set aside to retrofit houses to make them energy efficient.

Environmental groups welcomed the UK goal but expressed disappointment the move would allow it achieve the target in part through international carbon credits – a form of trading to compensate for emissions transgressions – something Greenpeace said would “shift the burden to developing nations”.

Last month the UK Committee on Climate Change set out in detail how net-zero emissions could be achieved. Its chairman John Gummer said it was “essential” that such credits were not used.

Last week No 10 dismissed claims from chancellor Philip Hammond that such a target would cost £1 trillion and could require spending cuts to public services.

Meanwhile, the Irish Solar Energy Association has welcomed indications that a feed in tariff (FiT) for domestic rooftop solar PV will be included in the “all of Government plan”.

This would provide payment to homeowners for excess electricity supplied to the grid. Currently, there is FiT in place in Ireland, so electricity not used in the home is spilling to the grid for free.

The Department of Communications, Climate Action and Environment has confirmed a long-term framework for microgeneration, including addressing existing barriers and establishing a suitable tariff regime, were being considered under the plan. – Additional reporting: Guardian