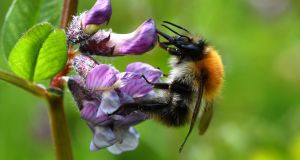 The NBDC report confirms short-term, accelerating declines in Irish bee populations including bumble bees and long-term declines in butterfly populations. Over half of monitored river water bodies are at “good” or “high” ecological status, but declines in the number of highest quality rivers continue.

“The 52 indicators underpinning this latest assessment represent a range of direct metrics such as the growth in protected areas or changes in insect populations, but also indirect indicators like changing attitudes towards wildlife protection or the number of local authority biodiversity action plans currently in place,” said project co-ordinator Dr Tomás Murray, senior ecologist at the NBDC.

“Overall, we’re making clear progress in only 31 per cent of the indicators, with progress in 65 per cent being either static or poor and another 4 per cent are of uncertain status,” he added.

The indicators track changes in biodiversity and understand why it is changing in terms of species, habitats and the impact of invasive species. The data is used to inform decision makers on goals, policies and actions to conserve and restore biodiversity while tracking and reporting on effectiveness of policy decisions and actions taken nationally, and benchmarking progress towards regional and global targets.

There is always a lag-time from when policies and programmes are implemented to when it is possible to detect their impact on wild plants and animals, Dr Murray said.

But despite recent efforts to protect and restore nature in Ireland. “fundamentally, the current status of Irish wildlife remains precarious. Ninety-one per cent of our habitats designated under EU law are ‘inadequate’ or ‘bad’ status, the number of high impact invasive alien species introduced into Ireland over the past 50 years has increased [by] 183 per cent and 90 per cent of our species have yet to have their risk of extinction assessed.”

The greatest gains in recent years have been in awareness and knowledge of Irish biodiversity, Dr Murray said. He cited the latest European surveys on attitudes to wildlife protection that show “over 90 per cent of Irish people agree that looking after nature is essential in tackling climate change, and at 4.2 million there are now three times the number of biological records in the Data Centre as we had 10 years ago”.

In contrast, measures directly relating to governmental actions that safeguard Irish biodiversity “are far from positive”. Based on CSO data the level of national expenditure on biodiversity in 2016, the latest year available, was €143 million: 27 per cent below the preceding five-year average and 47 per cent below the 10-year average. “If this trend continues, key national policies such as the National Biodiversity Action Plan 2017-2021 will be not fully implemented due to lack of resources,” the NBDC warns.

“At a time when biodiversity is under increasing pressure, it is essential that we have a broad set of national indicators that objectively can track how Ireland is doing on meeting its biodiversity commitments”, said NBDC director Dr Liam Lysaght.

The challenge for the NBDC was to expand its work so the evidence base for how biodiversity changing is sufficiently detailed and robust to detect changes at the local and national level. “This has become all the more important now, as we see the impact of climate change,” he said.

The NBDC said the indicators should be seen in the context of the recent Intergovernmental Panel on Biodiversity and Ecosystem Service Global Assessment, that warned of catastrophic consequences for humanity in the face of a global mass extinction.

They were more important than ever given the latest findings of Ireland’s Sixth National Report to the Convention on Biological Diversity (CBD) and subsequent cross-party declaration of “a climate and biodiversity emergency” in Ireland.

The report collated by the NBDC working in conjunction with the Department of Culture, Heritage and the Gaeltacht and National Parks & Wildlife Service is available here.