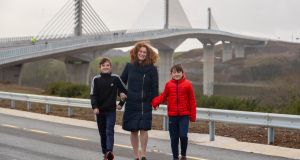 Rose Katherine Kennedy Townsend at the opening of the Rose Kennedy Fitzgerald Bridge in Wexford with Donagh and Eanna Grennan, grandchildren of Johanna Ryan who welcomed John F Kennedy to The Kennedy Homestead, New Ross in 1963. Photograph: Patrick Browne

Rose Katherine Kennedy Townsend, a grandchild of Robert and Ethel Kennedy, attended the official opening of the 36m high, 887m bridge and bypass on a sunny, if chilly day, where she spoke of the Kennedy family’s deep connection to Ireland.

The 14km bridge – which contains as much steel as the Eiffel Tower – is named in honour of Rose Fitzgerald Kennedy, mother of brothers John J Kennedy and Robert Kennedy, and matriarch of the famous Irish-American family.

When it opens to traffic on Thursday at noon the new bridge will be the longest in Ireland overtaking the Foyle Bridge in Derry (866m).

The structure crosses the River Barrow between Wexford and Kilkenny and forms a major part of the upgrades to the €230 million N25 New Ross bypass, taking articulated lorries out of New Ross – a former traffic blackspot.

Standing in front of a 500-strong crowd on the Wexford side of the bridge, Ms Kennedy Townsend said she had a wonderful day visiting cousins in her ancestral homestead in nearby Dunganstown.

She said Rose Kennedy was very proud of her Irish roots.

“This bridge is a wonderful tribute to my great-grandmother, and a symbol of her enduring love and lesson that it doesn’t matter who you are, where you come from, we are all God’s children. When some leaders threaten to drive us apart we need to honour those who build bridges that bring us together.”

While acknowledging the crucial role former public expenditure minister Brendan Howlin had in securing funding for the project, Mr Varadkar said he gave it the go-ahead when he was minister for transport in 2013. Work began on the bypass in spring 2016 and it was due to open in early 2019.

“It was really hard because nobody wanted to lend us any money or wanted to invest in projects like this because they didn’t trust the capacity of the Irish State and the Irish people to pay the money back,” he said.

Mr Varadkar said much has changed since then thanks to the sacrifices of the Irish people and the correct decisions being made at policy level.

“This new bypass, which includes Ireland’s longest bridge, will transform New Ross, Wexford, Kilkenny and the South-East,” the Taoiseach said.

“By reducing congestion and travel-times, improving road safety, and opening up economic opportunities, this will make a huge difference for commuters, for families, for businesses and for tourists.”

The new bypass will significantly ease chronic traffic congestion in New Ross town offering time savings of up to 30 minutes.

Between 15,000 and 20,000 cars a day are expected to travel across the bridge, which was designed by ARUP and Carlos Fernandes Casado SL and is estimated to have cost around € 90m to build.

The State’s €230m investment in the New Ross project came in on budget, a project spokesman said.