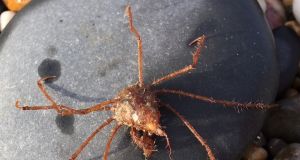 I encountered this carcass on a beach in Ballyconneely, Co Galway. It looks much bigger than a seal and has a fur-like covering that appears much like a walrus. – Dr Ben Keatinge, TCD, Dublin 2

It is a walrus that has been around in the sea for a long time; the remains of a tusk are visible in your photo. A live one appeared in Clew Bay, Co Mayo, in 1999.

We found a few of these wee critters washed up near Wicklow town. The body length was about 3cms. Are they juvenile spider crabs? – Patrick O’Donnell, Wicklow

It’s an adult slender spider crab, which has lost its first pair of legs that bear the pincers.

The rosemary or lavender beetle in the January 14th Eye on Nature is a very destructive beetle which seems to have arrived in Wicklow and east coast counties. It is as destructive of lavender as the red lily beetle is on lilies. – Angela Jupe, Shinrone, Co Offaly

My five-year-old son discovered this shield bug near the log basket in our sitting room. We have never seen the colouring before. – Niall and Hugo O’Toole, Waterford

We saw a couple of redwings on Achill Head in early November. – Michael Flanagan, Rathfarnham, Dublin 14

They can appear on coastal headlands in late autumn.

At the People’s Park I saw a raven at the top of an old chestnut tree calling as if distressed until he was hoarse, and facing in the same direction. It was like what you would expect from a fledgling at nesting time. – Paddy Demery, Kilcoole, Co Wicklow

It sounds like a young bird being driven off to find a new territory by its parents.