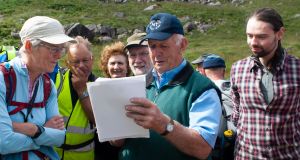 Robert Carter, who worked as a teenager in the last active Wicklow lead mines, at Glendasan, heads a guided tour of the Miners’ Trail in Glendalough. Photograph: Joe Haughton

The great glens at the heart of the Wicklow mountains are drenched in associations with natural wilderness and distant, often romanticised, historical moments.

It’s easy to imagine, as I did for much of my life as a native of the county, that the enchanting oak woods of Glendalough represent a surviving fragment of some pristine Irish ecosystem. Easy, that is, until you see a photograph from the early 20th century showing much of the valley bare of trees.

Landscapes are much more than one frozen moment. They are palimpsests revealing, once you learn how to look, layer after layer of dynamic natural and cultural changes.

The exceptional industrial archaeology of these valleys is much more recent than St Kevin. But, long neglected, it has largely disappeared into the hillsides that gave it birth

Visitors also flock to the same valley for a sense of history, to soak up the atmosphere of the medieval monastic university city linked to St Kevin, for whom a pilgrim path has recently been laid out in the adjacent valley of Glendasan.

A more adventurous minority climb over the Spinc and Mullacor into neighbouring Glenmalure, to conjure up the rebel spirits of Feagh McHugh O’Byrne and Michael Dwyer, with their heroic narratives of anti-colonial resistance.

En route, these hikers pass traces of a heritage revealing a very different layer of our history. The exceptional industrial archaeology of these valleys is much more recent than St Kevin, O’Byrne or even Dwyer. But it has long been neglected, and much of it has disappeared into the hillsides that gave it birth.

Now it has been rescued, thanks to the dedication of some local individuals, and the support of academics and State agencies.

If you walk the long path, so quiet today, that borders Glendalough’s upper lake, you might wonder at the unusual concentration of Scots pines towering all around you. Walk a little further, and you will come on remnants of the Miners’ Village, a misleading name because it was more production site than home place.

Lead, extracted by hard labour from galleries under the slopes above you, was processed here as recently as 1935. The pines were planted to make pit props.

“People didn’t consider the ordinary things to be history,” says Carmel O’Toole, whose book Glenmalure: The Wild Heart of the Mountains is a richly detailed hymn to the human communities of her native valley.

For most of us, the revelation that these quintessentially remote and rural valleys were once significant industrial centres is rather extraordinary. But O’Toole is right. Rural labourers, whether industrial or agricultural, are often the invisible people in our mainstream national narratives.

Robert Carter, who worked as a teenager in the last active Wicklow lead mines until 1957, has always wanted the lives and labour of his fellow miners to be recognised

Many individuals and groups deserve credit for recovering the mining heritage of these glens, but O’Toole gives particular kudos to one remarkable man, Robert Carter, who worked as a teenager in the last active Wicklow lead mines, in Glendasan, until 1957.

“Only for you, none of this would have happened,” she tells him.

He has certainly accumulated meticulous records. He comes to our meeting with a box containing individual photographs of the 80 men who worked with him. He also shows me a yellowed but carefully preserved Wicklow People clipping. It’s a report on an inquest on his workmate, James Mernagh, who was killed in an accident that very seriously injured Carter (see below).

Despite, or perhaps because of, this grim experience, Carter has always wanted the lives and labour of the Wicklow miners to be recognised and remembered. As a hill-walker, he sometimes encountered hikers who expressed curiosity about the slag heaps, ruined buildings and rusted machinery that are scattered over the valley slopes. He enjoyed telling them what he knew.

Meanwhile, two valleys away in Glenmalure, O’Toole was completing research for her book. When some granite troughs were stolen from outside her home, a worrying thought struck her.

The same fate could very easily befall the first-class granite stonework that had created the mining infrastructure in the valley, at Ballinafunshoge and Baravore, without anyone noticing. To protect this heritage, it needed to be restored, and cherished.

She got the Pure Mile group in Glenmalure interested, and they contacted a mining heritage committee already active in Glendalough. An integrated group called Glens of Lead was formed.

The outcome, with support from bodies including the Wicklow Uplands Council, Coillte, the Heritage Council, the County Council and Fáilte Ireland, was the restoration of collapsing buildings, and the creation of the Miners’ Way. This is an exceptionally scenic 18 km trail linking the three valleys by way of their 10 mining sites.

You can walk from either end, but starting at the high point in Glendasan, just off the Wicklow Gap road, gives a magical sense of penetrating ever more deeply into the mountains. Or you could just do a section. The easiest ones are the routes from upper Glendasan to Glendalough, or from there by the lakes to the Miners’ Village.

The climb onwards runs via the Van Diemen’s Land mine (grimly but appropriately nicknamed by exhausted miners) and over the Spinc ridge to Glenmalure. This is the most rewarding in terms of views. Be warned, though: this section demands a map and compass, good footwear, hiking experience and plenty of puff.

The majestic glens landscape around you was forged into granite and schist when two continental shelves collided 420 million years ago. Veins of minerals such as lead (and some zinc and silver) developed, in the superheated quartz between the rock formations. A mere 20,000 years ago, glaciers sculpted these distinctively U-shaped valleys, which would eventually give miners relatively easy horizontal access to the lead deposits.

It is the human stories that will grip most imaginations: Fiddlers’ Row, a deadly landslide, 100 candles crossing the ford en route to Christmas Eve Mass

Your hike will be enhanced by many plants and animals. The mining buildings are often host to a profusion of ferns, maidenhair spleenwort, wall rue, polypody and rusty-backed fern among others.

In season, you will sometimes walk through carpets of bogland flowers, including orchids, butterwort, bog asphodel and bog cotton. You may easily see deer, hybrids between native red and introduced Sika. Cast your eyes skyward, and you may spot a peregrine falcon. The rare goosander duck fishes elusively on the rivers. You will be accompanied everywhere by the raven’s croak.

But do pause at each mining site, where new informative signage is still being added. There is plenty of technical detail, but it is the human stories that will grip most imaginations: Fiddlers’ Row in Glendasan, housing for miners who were all reputed to be musicians; the landslide that took the lives of young girls in Ballinafunshoge; the 100 candles that crossed the ford en route from Baravore to Christmas Eve Mass.

These beloved glens offer us an even richer experience today, thanks to this new trail.

Life, and death, underground in the uplands

Robert Carter began working in the Glendasan mines at the age of 16 in 1953. He earned a shilling (very roughly 5c) an hour for sorting 10 tonnes of lead, outdoors, over 48 hours.

Did he enjoy it?

“Absolutely not! The frost and cold were dreadful in winter. Your hand could freeze to anything you touched. Gloves? Only gentlemen wore gloves.”

He went underground two years later, where the pay was slightly better but the risks much higher, drilling rocks to insert explosives. The explosion and collapse that killed his cousin, James Mernagh, crushed one of Carter’s lungs.

He was in hospital for three months, and out of work for five years.

He finds rock fragments under his skin to this day. But he still walks the hills at the age of 83. He leads tours on the Miners’ Trail during Heritage Week.

“You could hear a pin drop when he talks,” says local historian Carmel O’Toole.