Irish farming cannot be beyond question in climate change battle 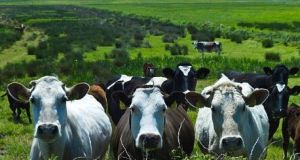 Achill islander Saoirse McHugh: “We need to immediately abandon plans for increasing herd size and begin destocking. We must demand that CAP payments are used to facilitate farmers in the transition towards more climate-friendly agriculture.” File photograph: Getty Images

A fortnight ago, the Irish food scene was on a high. Butter sales hit the historic €1 billion mark, and beef and livestock exports came in just short of €4 billion a year.

Bord Bia chief executive Tara McCarthy welcomed the news of €12 billion food exports with pretty bullish words. Ireland is, she said “well-positioned to exploit the relentless growth in the global demand for food”.

It seemed that anything other than reverence for the Irish food sector verges on an act of treason. Last week, Taoiseach Leo Varadkar fell just short of devouring a burger at the gates of Leinster House to row back on his remark about trying to “eat less meat, both for health reasons and for reasons of climate change”.

Despite the warning last October by the Intergovernmental Panel on Climate Change that there were just 12 years to avert catastrophic climate change, Irish food and farming has been quietly assumed to be off the table when it comes to policy pivots. We are locked and loaded into an expanding livestock sector, the farming lobby argues; there are simply too many global consumers for our low-carbon meat and dairy products.

But on Wednesday the Lancet published a stark outline of what would constitute a viable diet for 10 billion humans on Earth. This diet would involve a 90 per cent reduction in meat consumption for the average Irish eater. Encouraging emerging middle classes onto a staple diet of baby formula and burgers may make business sense, but it no longer makes environmental sense.

McCarthy was in the US last week, a Bord Bia spokeswoman said, and not available for interview. In a statement, the State agency said: “The Lancet report does not acknowledge the important regional differences in terms of impact on food products.

“From an Irish perspective, as an agricultural nation, and one that is among the most carbon-efficient in the world, we need to find a balance between producing food to meet global demand, while also sustaining the planet for future generations.”

On Friday, Junior Minister for Agriculture Andrew Doyle was in Berlin at the Green Week food conference. A query to his department on how he, as a beef farmer, felt about the Lancet study remained unanswered at the time of writing.

Irish Farmers’ Association horticultural spokesman Pat Farrell said the guidelines recommending an increase in vegetable consumption could be good news, but a “more resilient horticultural sector” needed support to compete with cheap imports. As an example, he said Ireland had just one commercial grower of spring onions left. “The rest come in from Mexico. ”

Environmental campaigners organised a children’s march on Leinster House on Saturday amid growing calls for action. Younger voters may not be as easily persuaded by arguments about the untouchability of Irish agriculture.

Alarm about climate change prompted Achill islander Saoirse McHugh to stand for the Green Party as their European election candidate for the Midlands and North-West. A postgraduate in sustainable agriculture and food security, she wonders who benefits from intensified livestock agriculture.

‘A rebalance of power’

“The current trend in Irish agriculture is forcing many farmers out of business and is really only benefiting the co-ops and the top 5 per cent of farmers. Changing that system will give an opportunity for a rebalance of power,” McHugh says.

“We need to immediately abandon plans for increasing herd size and begin destocking. We must demand that Cap payments are used to facilitate farmers in the transition towards more climate-friendly agriculture.

“We cannot be concerned about the emissions that other countries may or may not produce in our stead. We can only legislate for and take care of our own emissions. This change doesn’t have to decimate our agriculture industry. In fact, it could be the making of it.”