Taoiseach and Minister for finance will arrive in Davos on Wednesday 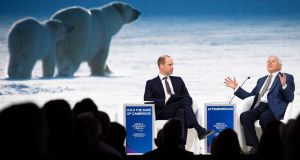 Prince William and David Attenborough at a session at the annual meeting of the World Economic Forum in Davos, Switzerland. Photograph: Gian Ehrenzeller/Keystone via AP

Donald Trump, the biggest attraction at the 2018 Davos jamboree, resorted to a satellite link-up and his favourite social media platform to keep in touch – after he decided in recent weeks to cancel his appearance and that of other top White House officials, amid a government shutdown.

The US president allowed his secretary of state, Mike Pompeo, to deliver a video speech to the global elite gathered at the Swiss Alpine town on Tuesday afternoon, the contents of which could have been written by the man himself.

“New winds are blowing across the world,” said Pompeo. “The central question is this: do they signal fair weather or foreshadow a storm? Is this pattern of disruption a force for good or not? I’d argue this disruption is a positive development.”

Still, Trump’s absence allowed the World Economic Forum organisers to invite British naturalist David Attenborough on to the main stage on Wednesday to warn in an interview with Prince William that humans risk damaging the natural world beyond repair – without fear of distraction from the world’s most famous climate change sceptic.

“It’s difficult to overstate the climate change crisis,” said Attenborough (92), who received a Crystal Award for his leadership in environmental stewardship on the eve of the summit. “We are so numerous, so powerful, so pervasive, the mechanisms we have for destruction are so frightening, we can exterminate whole ecosystems without being aware of it.”

New Zealand’s prime minister Jacinda Ardern joined the push on a panel chaired by climate change campaigner Al Gore, calling for environmental “guardianship”. “This is about being on the right side of history,” she said.

While Trump was joined by other global leaders, including UK prime minister Theresa May and Emmanuel Macron, in crying off from repeat visits to the annual WEF as they dealt with more pressing matters at home, Leo Varadkar has concluded that Davos is an opportunity not to be missed.

The Taoiseach is set to arrive at Europe’s highest town, some 5,120ft above sea level, late on Wednesday with Minister for Finance Paschal Donohoe.

“With Ireland being in the international headlines of late over the Northern Ireland backstop [in relation to Brexit], it’s probably good that they are turning up at this important watering hole to explain their position to political and business leaders,” said Feargal O’Rourke, managing partner of PwC Ireland, who also made the trek to Davos.

Donohoe, who previously faced criticism from Nobel prize-winning economist Joseph Stiglitz on a Davos panel for being part of an international tax “race to the bottom”, will find himself on the defensive again this year.

He is due to appear on another taxation panel on Thursday, alongside Ángel Gurría, secretary general of the Organisation for Economic Co-operation and Development (OECD) and Bastian Obermayer, a Pulitzer Prize-winning journalist with Germany’s Sueddeutsche Zeitung, who led global coverage of the so-called Panama Papers and Paradise Papers in recent years on how the world’s wealthiest hide wealth offshore.

The State, which is among the EU members looking to frustrate European Commission efforts in recent times for a common consolidated corporate tax base, financial transactions tax and digital tax system, came out last week against Brussels’ latest proposal – to get rid of national vetoes on such matters.

It may be well below freezing point outside, but this is likely to be a sizzling panel.