Michael Viney: Declan Murphy’s engaging ‘A Life in the Trees’ the result of painstaking study 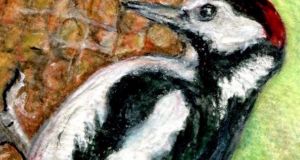 Once, perched on a high cliff in Greenland, I took my turn at recording, at 15-minute intervals and for what felt like hours, the postures of a barnacle goose, sitting on her eggs on a nearby ledge. Was her head held up, extreme-head-up, or swung round for sleep, beak plunged into the warmth between her wings?

Such can be the tedium of behavioural fact-gathering in ornithology that may or may not have significance. I was not, of course, an ornithologist, nor indeed a proper naturalist, since these, too, need to be born not made.

I’m reminded of this by reading A Life in the Trees by Declan Murphy, as engaging an expression of a true naturalist’s passion as Ireland has produced.

The book is self-published and handsomely illustrated, with aid from the National Parks and Wildlife Service and can be had from BirdWatch Ireland for €20.

Murphy has been watching birds since he was a young child and had parents who took him for walks every weekend to the local woods, mountains, estuaries and lakes of Co Wicklow. He had “no interest in sport of any sort and even less interest in people” – those, that is, who were not David Attenborough, Éamon de Buitléar or Gerrit van Gelderen.

As a teenage twitcher, he was intrigued by the absence from Ireland of the colourful woodpecker family, of which the island next door has four kinds. He had to wait many years until, in a Wicklow oakwood, “came a sound so eloquent and beautiful that it seemed to belong to another woodland realm: the sound of a woodpecker drumming . . . like a mellow drum-roll on a wooden percussion box”.

An early wonder of A Life in the Trees is that anywhere so idyllic for a naturalist as these woods could still exist in Ireland. But most of it unfolds with the privilege of access to private land. (One neighbour, John Boorman, provides the book with an approving foreword.)

Here, with rare walkers and no fear of teenage vandals, Murphy could put up a hide of timber and towels with every confidence, or sit undisturbed for wintry hours with his back to a holly tree, hoodie cupped about his ears.

The wood is, however, only one in the valleys of the Avonmore river. And Murphy was just one of the group of dedicated birders, scientists or not, who, “endlessly searching tree after tree, woodland after woodland”, have charted the spread of breeding woodpeckers since 2009. The 35 nests found in Co Wicklow last year may still be far from all there were.

The arrival of the great spotted woodpecker to breed in Ireland is part of a fourfold expansion in Britain and across much of Europe. Ireland’s early loss of native forest could explain its long absence, and the Avonmore valley provides a rare and intricate landscape of rock, bilberry bushes and oak.

Not an oak, however, but a wind-torn Spanish chestnut, alone in its glade, gave Declan Murphy his chance of long and intimate study of woodpecker behaviour. The tree’s bare trunk already held five separate nesting holes from previous years and the eventual peep of a head from one of these began three spring seasons of watching.

His careful chronicle of woodpecker life takes the birds from courtship to fledgling dispersal, by way of feeding a pair of chicks – “Red” and “Black” – seven times an hour, 16 hours a day. So immediate and concerned is his account that one comes to live it with him, if spared the scourge of midges that penetrate his dark and humid hide.

There are also many times when nothing happens for an age except when the glade receives its other visitors: the graceful Sika deer, a hare, the squirrels. He writes about them all, and also tempts an unseen predator, the pine marten, to audition before a trail camera, “draped down a tree like a snow leopard in the Himalayas”.

Both young Red and Black came to sad ends, handed to him in bags for filing in his freezer. They had flown into windows in gardens to which their parents had brought them, eager for peanuts.

As the breeding population continues to expand, visits by this small but exotic-looking bird are becoming quite common in many Co Wicklow gardens. But Murphy is doubtful of any spread of nesting to the parks of the capital, largely oakless as they are.

In Britain, he tells us, where woodpeckers thrive on suburban bird feeders, they have also learned to carve a hole in the side of blue-tit nesting boxes and then extract the chicks to feed their own young.

“Perhaps,” Murphy suggests, “when the Irish population of woodpeckers learns of this feeding bonanza they will finally settle into the suburbs of Dublin.”