Jellyfish with sting that closes beaches

Michael Viney: the lion’s mane jellyfish has been medically problematic for a century 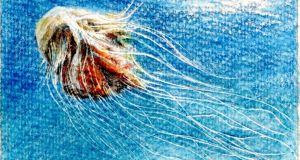 Pulsing forward in glancing light beneath the waves, it holds a fiery glow at its heart as if out to give fair warning. Fiery, indeed, can be the consequences of a stroke of their slender filaments across a swimmer’s skin.

Drifting ashore, the lion’s mane lies in a big, glossy puddle of marmalade or damson jam. But its tentacles stay armed to fire a venom that can later explode in human agony or even systemic damage.

Though one of the least abundant species in most summers, it can still crowd individually into Dublin Bay

Cyanea capillata is one of the biggest jellyfish in Irish waters, its bell up to a metre across, with thousands of threadlike tentacles trailing for metres behind. Though one of the least abundant species in most summers, it can still crowd individually into Dublin Bay, where bad stings have been frequent, swimmers have had hospital treatment, and beaches have had to be closed.

The lion’s mane has been medically problematic for a century, and the national rise in swimming has brought stings needing medical care to an estimated 100 a year. This prompted scientists in the Ryan Institute at NUI Galway (led by Dr Tom Doyle, with colleagues in the University of Hawaii) to test the best way of disarming its poisoned arrows.

Their research displaces some common first-aid “remedies”. Washing threads of tentacles off with seawater, they found, actually speeds up venom delivery. Finding someone to urinate on the sting is little better. Ice-pack treatment does not reduce the red-cell damage. The best aid is 40 minutes’ treatment with a hot-pack or hot water after rinsing off the tentacles with vinegar (text at doi:10.3390/toxins9070215).

Like the North Sea and the Baltic, the Irish Sea narrows the ocean at the southern limit of the lion’s mane’s range in the northern Atlantic. The animal’s size increases in colder water – the biggest-ever specimen was found on the shore of Massachusetts Bay in 1870, with a bell 2.3m across and tentacles 37m long.

Unusually this summer, readers have reported half a dozen of the jellyfish stranded separately on the cooler northwestern shores from Donegal to Connemara. But the Irish Sea notoriously gathers lion’s mane, along with great drifts of moon jellies (Aurelia aurita), the compass jellyfish (Chrysaora hysoscella) and visiting squadrons of the big barrel jellyfish (Rhizostoma pulmo) with a sting too weak to hurt humans.

A PhD student at University College Cork, Thomas Bastian criss-crossed the Irish Sea on ferries as part of his study of lion’s mane. He counted 100 lion’s mane in five minutes on three occasions. Numbers varied from year to year, between July and September, but there was no way of knowing how “local” the jellyfish were, or how far they were gathered by a seasonal gyre of currents in the western Irish sea.

Like other jellyfish, C capillata reproduces in a complicated cycle. The female deposits larvae from fertilised eggs on a hard surface under the sea. Here they grow into fixed polyps that reproduce asexually. They generate small creatures in a stack, like upturned saucers. These break off one by one to grow, eventually, into the full-size adults, the medusae.

Dramatic regional blooms of jellyfish, in recent decades, such as those in the Bering Sea and off southwest Africa, have been matched to overfishing to suggest that oceans may be doomed to eventual domination by predatory jellyfish. They consume planktonic marine eggs and larvae that many fish need, other jellyfish, and even – as with the lion’s mane – the fish themselves.

Trends to this sweeping scenario remain unproven and some research credits abnormal blooms to natural cycles of abundance. But the ecological threat has helped generate new and urgent research into jellyfish behaviour and their impact on ocean ecosystems.

Doyle is a pioneer among those tagging jellyfish to study their diving movements to find food, or to avoid rough seas or predators. He has also prefers to present them “in a positive light and suggest that the story is not entirely one of doom and gloom”.

Their many “ecosystem services”, as he describes, include their carbon transfer to the deep ocean and the microhabitat they often provide for dozens of young fish, retreating for shelter among their tentacles. Protected from stinging cells by a mucus coating, they steal food from the medusa but also eat crustaceans that are jellyfish parasites.

As for the predators on jellyfish, a joint Irish/Dutch aerial survey of the abundance of the vertically swimming sunfish (Mola mola) in Ireland’s Atlantic waters found 12,700 of them up to 300km off the coast in summer and more than 8,200 in winter. Between them they eat some 2,600 tonnes of assorted and watery jellyfish every day.

Migrating further north than expected and tolerating sea surface temperatures down to 8 degrees, the world’s largest bony fish has become, as the survey shows, a largely unrecognised control on jellyfish blooms (see doi:10.1038/s41598-017-02103-6).