Listening for the whistle on the shore

Another Life: Michael Viney on the Irish curlew’s staggering decline 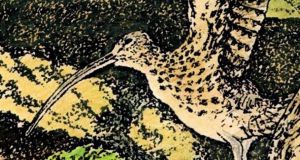 Threat of extinction: curlews were on the official Irish list of birds on offer to shooters until 2012. Illustration: Michael Viney

Autumn’s silences on this side of the hill can be quite profound, as much a signal of the season as the magical refocusing of light. A sound I could pine for, and have missed for many years, is the lonesome call on the shore, the cour-lee! cour-lee! of the curlew.

In a column at this time some 30 years ago I wrote that “curlews will be part of our lives from now until next spring, their slow chevrons swirling across the hillside in the endless prospecting of pastures”.

In a lager ad on telly at that time their call evoked for expat Irishmen keen longings for Sally O’Brien, a glass of Harp, and a whole landscape of the heart. Such iconic usage has given special resonance to the crusade to save the native curlew, Numenius arquata, from extinction.

In the 1970s Ireland still had some 12,000 breeding pairs of curlews. Recent national surveys have found fewer than 150

Few of the curlews I remember from past Septembers may have been Irish birds. Curlews have always been great wanderers, and the numbers of native breeders have been masked by the presence and movements in Ireland, almost year round, of migrant flocks from Britain and beyond.

The one-time abundance of native curlews is clear from the old Irish bird books. One from 1954 reports curlews nesting “annually and abundantly in the moors and meadowland near Brittas, Co Dublin, and in some recent years in the lower ground between Tallaght and Saggart”.

At that time, too, the spring exodus of migrants in March and April, flying noisily northwards at night, was a noted phenomenon in towns and cities, where the lights seemed to bring the huge flocks lower.

The best time to count native birds in Ireland is, therefore, in May, when, to quote one practised observer, “the moor soon rings with the marvellous bubbling songs and the air dances of different cocks”.

In the 1970s, says BirdWatch Ireland, there were still some 12,000 breeding pairs . Recent national surveys have found fewer than 150, scattered in handfuls across the Republic. Their reproduction rate is low, as predators on their chicks threaten extinction within a decade.

Such a staggering decline has been masked by the visiting migrants. But even these have been winnowed away as human development reduces and degrades curlew habitats. Of the 13 global curlew species, seven are seen as under threat, some of them critically.

The Irish Wetland Bird Survey reckons that Ireland now supports some 35,000 European curlews in winter, concentrated in our estuaries but seen in almost every county. Those in Dublin Bay often commute by day to feed in city parks, to the pleasure and occasional puzzlement of people reading of curlew “extinction”.

A conservation programme long urged upon the Government by BirdWatch Ireland produced this year’s pilot project by the National Parks and Wildlife Service. It recruited farmers and gun clubs to co-operate in habitat “enhancement” (clearing scrub, blocking drains, creating scrapes) and predator control.

In examples offered by the NPWS, a farmer with curlews successfully breeding on the land could earn €750 for improving nest protection, perhaps with foxproof fencing, while a neighbouring farmer where curlews feed could earn €675 for improving the habitat. The more effort and vigilance they spend through the breeding season, the more they earn.

The first five projects have been in north Co Monaghan; the Stacks Mountains, in Co Kerry; Lough Ree, on the River Shannon; north Co Roscommon; and Co Donegal. For each the NPWS recruited a local team for expert advice, research and nest protection, along with a well-respected curlew “champion” for team liaison and encouraging local support.

Added to the loss of habitat through forestry, turf-cutting, land ‘reclamation’ and moorland fires, predators are now the crucial pressure on curlew survival

Added to the loss of habitat through forestry, turf-cutting, land “reclamation” and moorland fires, predators are now the crucial pressure on curlew survival. Foxes are the obvious villains and a primary target for gun clubs, but some of the crow family can take particular toll on curlew eggs and chicks.

As one visiting delegate reported from an international wader conference in Cork last autumn: “Is Ireland the Corvid capital of the world? The abundance and distribution of that family . . . dominating the landscape, both rural and urban, is astonishing.”

Ireland may, indeed, have exceptionally high numbers of the prime nest robbers – magpies, hooded crows and ravens – as a result of farming changes, urban sprawl and supply of carrion as roadkill. Their local control in the spring breeding season, already a part of conserving wild game birds (red grouse, grey partridge) is now part of protecting curlews.

These, too, have been classed as wild game birds and regular quarry for the pot. In the 19th century immense numbers in autumn and winter found the coast of Co Dublin dotted with shooters, creeping low and trying not to raise the first “whaup!” of flock alarm. Up to 2012, with concern for Europe’s curlews already widespread, curlews still figured in the official Irish list of birds on offer to shooters in the open season.