Campaign to save Dublin buildings from MetroLink demolition steps up 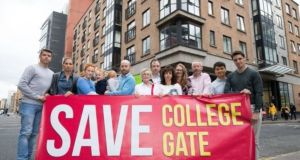 Campaigns are intensifying to prevent the demolition of the Markievicz Leisure Centre and College Gate apartments on Townsend Street in Dublin to make way for the MetroLink rail line.

A public meeting is to be held in Liberty Hall on Thursday evening, and more than 500 signatures have so far been added to an online petition. The petition, set up in recent days, calls for the Transport Infrastructure Ireland and the National Transport Authority (NTA) to find an alternative site for the proposed underground metro station.

Details of the preferred route of the €3 billion metro line, which combines the previously planned Metro North from Swords to the city centre with an upgrade of the Luas Green line between Charlemont and Sandyford, were announced last March.

The Markievicz centre, which was refurbished by Dublin City Council two years ago at a cost of more than €1 million, and the complex of 70 apartments built above it have been earmarked for acquisition and demolition so an underground station can be built.

Labour Senator Kevin Humphreys said the apartment owners were in an “extremely difficult and precarious position” as they would be unlikely to be able to afford to buy similar apartments in the area, due to shortages and spiralling costs.

“The NTA needs to enter into meaningful discussions with these residents,” he said.

Owner-occupiers, tenants and landlords at the apartment complex have formed the Save College Gate group in an attempt to prevent the demolition of their homes.

The Metro route announced last March also involved the use of Na Fianna GAA club pitches and adjoining school pitches on Mobhi Road in Glasnevin for a major construction site, and the closure of the road linking Rathmines and Ranelagh at Dunville Avenue in south Dublin to remove a level crossing.

However, following representations from Taoiseach Leo Varadkar in relation to the GAA lands and Minister for Housing Eoghan Murphy over the Dunville Avenue closure, the NTA agreed to review the route.

It emerged last week the transport authorities will not publish the revised route of the line until next year, because of the complexities involved in redesigning the line.

It is understood the plan authorities are planning to extend the tunnel south - it was due to end at the Luas Charlemont stop north of Ranelagh - past the Dunville Avenue stop, and that lands belonging to Home Farm Football Club will be used instead of the GAA lands.