Una Mullally takes a look at current development trends in Dublin, and the impact they’re having on housing, creativity and community. Video: Kathleen Harris 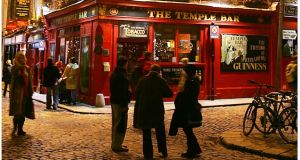 Clubs and club nights that offer a sense of discovery, community, and creativity are a norm in other European capitals. Photograph: Bryan O’Brien

Dublin is experiencing a nightlife boom. Kind of. What it’s really experiencing is a glut of restaurant openings and bar refurbishments.

But if there’s one thing we know about booms in the city, it’s that they have a tendency to go bust. Beyond opportunities for socialising largely aimed at suburban Dubliners travelling into the city, tourists, and people with enough money to buy €12 cocktails, the type of nightlife culture that could be loosely characterised as “cutting-edge” is woefully lacking in Dublin.

The city now has only a handful of quality electronic music-driven clubs; clubbing culture is dissipating, squeezed out by the “boom”.

Clubs and club nights that offer a sense of discovery, community, and creativity are a norm in other European capitals. The layer of creativity that should if not overlay a city at night, then at least intersect with it, is being scrubbed away.

Of course, there are venues, promoters, collectives, parties and club nights aiming for something above average in a city that increasingly embraces the nice-but-boring, but a creative nightlife scene is not being facilitated, nor offered the support it needs.

One way of fixing this, is for Dublin City Council to appoint a “night mayor” or “night czar”, as other cities have, to prioritise, promote, support and embrace the importance of nightlife, culture and creativity. Such a person could promote the cultural and economic benefits of nightlife and club culture, support venues in danger of closing down, lobby for kinder licensing bylaws, and approach nightlife in a facilitatory mode, instead of a mode of enforcement.

In London, for example, mayor Sadiq Khan appointed Amy Lamé as the city’s first “night czar”. London’s night-time economy contributes £26.3 billion (€29.6 billion) to the city. A Culture At Risk Office was also established, supporting cultural spaces at risk of closure, and within the first year it supported 200 spaces.

Other supports have also been introduced in London. For example, new developments near music venues are responsible for their own soundproofing, instead of the music venues themselves having to foot the cost. London’s vibrant, grassroots nightlife is valued and supported.

Without recognising the cultural contribution of nightlife, and then establishing supports at local government level to ensure it doesn’t die, creative nightlife is swimming against a tide of gentrification, development, enforcement, and simple economics.

How did Dublin’s nightlife culture become so staid? The city’s clubs have always been curtailed by strict licensing laws, reducing the financial margins in running a small independent club to almost nothing. The economics of the situation – whereby a club may operate on a Friday and Saturday night, 10pm-2.30am, giving them nine hours where customers are actually in the venue over an entire weekend – are tough.

When the focus on every square metre in the city is based on how much profit can be squeezed from it – as hotels, aparthotels or student accommodation – creative nightlife spaces look like economic anachronisms. Yet anyone with any investment in the vibrancy of a city knows “value” in a city should not just be measured in monetary terms.

The housing and rental crisis is having a terrible impact on the city’s creativity, pushing young people and artists out of the city.

Spaces matter, and places to have parties are disappearing. The fabric of a city is about its landscape but also about its potential. The current wave of development in Dublin, largely focused on hotels, offices and expensive short-term accommodation, is destroying the potential for nightlife in the city.

Disused buildings, warehouses and other spaces are being demolished. Some of this demolition very obviously removes existing clubbing infrastructure, for example, the demolition of the nightclub Hangar, and the upcoming “redevelopment” of the Tivoli theatre, also known as the club District 8.

During the recession, when development and building stalled, some buildings were repurposed for creative, artistic, and cultural use. With no one around to develop the spaces, they became available. At that time, there should have been moves to protect this emerging, energetic, but also very fragile grassroots creative infrastructure. That did not happen.

So when the economy woke up, people were moved on. Rent hikes forced artists out of studio spaces. Squats – such as the hive of cultural activity at Squat City in Grangegorman – were demolished. Buildings that housed clubs began to make more monetary sense to their owners as hotels.

So what else can we do? The long-stalled reform of local government, beginning with the fundamental idea of a directly elected mayor, has been stalled once more.

A local government that understands, supports and protects the cultural value of creative nightlife in the city is vital for that nightlife’s survival. Right now it’s dying. Having a night mayor or night czar would be a step towards supporting the brave, fun, and creative people who want to take the risk to do something interesting, things that adds value to so many lives.

This focuses on improving the city as a place to live and socialise. Historically the city has been weak on the provision of public spaces and on promoting community engagement – instead we have had an excessive focus on capital solutions.

This role could be within Dublin City Council and, if properly structured, could contribute significantly at low cost as long as it has the genuine support of the senior management and the council.

Direct costs would not be high and could simply start with the salary costs and resourcing of an office. The benefit of this capital idea could also outweigh the cost as the utilisation of public spaces is improved along with strengthened community engagement.

Having a dedicated person is a good idea as they can gather data on the needs and potential while at the same time developing a revenue stream, which would include the roll of public infrastructure, safety and other services.

While I’m uniquely unqualified to talk about cutting-edge nightlife, I like this idea. It’s simple and could deliver relatively cheaply, benefiting locals and tourists.

Nightlife is one of the big factors in tourism. Some countries, for example some of the Baltic cities, have invested here and reaped dividends, moving away from the old stag-party model. It could bring new tourism and help to attract and keep young professionals needed by the city’s businesses.

There are more important things than nightlife, of course, but this could be easily done, even as a trial initially.