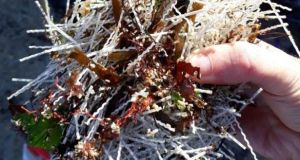 Dun Laoghaire-Rathdown County Council has described as a “damaging” environmental incident the discovery of thousands of pieces of plastic found washed up on beaches in the area.

The council received complaints about pollution in the Forty Foot and Sandycove areas of south county Dublin on Friday.

The main contractors redeveloping the Dún Laoghaire baths site, the SIAC/Mantovani Group, began a clean-up operation on Friday afternoon, according to the council.

This is expected to continue today and tomorrow, with assistance from council crews.

“The primary objective at the current time is to minimise the impact of the plastic on the local area. The Council also wants to thank the public who notified us and those who have voluntarily assisted in the clean up efforts,” a council statement said.

SIAC told The Irish Times on Friday “a quantity of fibres were washed out from a recent concrete pour”. The concrete is placed on the sea bed at low tide to form the foundations for pier works.

Today, the council said SIAC had co-opted a specialist third party environmental firm to help assess and mitigate the affects of the pollution.

“They have further advised that the plastic strips used in the concrete setting works are chemically inactive and do not pose a damage to water quality. A temporary halt has been placed on the concrete pouring works.

“However, as a precautionary measure the Council are having bathing water samples analysed, results of which will be publicly available. Notices are in place advising bathers and beach users of the situation.”

The council said it took its statutory and moral responsibilities as guardians of the local and wider environment very seriously. “We are keenly aware of the potential impact that this plastic pollution event could have on local marine and foreshore ecosystems.”

The council said while an initial investigation was underway, it had demanded a full report from SIAC on the exact cause of the incident.

“We will be in ongoing contact with SIAC over the weekend and will both assist and monitor the SIAC cleanup. We will be co-operating fully with all relevant agencies including the EPA in any further investigation into this damaging environment incident.”

Last April a €9 million contract for the baths project was signed between the council and the SIAC/Mantovani construction group. It is expected to be open to the public in the spring of 2020.

Martin Maher, chief executive of SIAC, said on Friday: “Our teams have been tasked to investigate why this may have happened, but in the interim the key task is now to commence a clean-up.”

1 Harris agrees with PSNI that army council still oversees both Sinn Féin and IRA
2 Drug dealer loses codes for €53.6m bitcoin accounts
3 The close links between Sinn Féin and IRA untangled
4 Varadkar says any Fine Gael deal would have to recognise strength of its vote
5 MV Alta: The unmanned voyage of the Ballycotton ‘ghost ship’
Real news has value SUBSCRIBE