Former president urges every citizen to make the climate issue personal; to recycle, to reuse and to look at their consumption 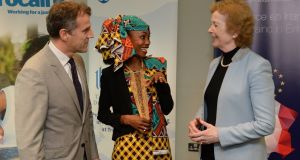 The rights of communities in the midlands who have depended on its bogs for a living over many decades need to be protected as Bord na Móna gets out of peat production in the coming years, former president Mary Robinson has said.

As the State company pursues a fossil fuel-free future and adopts renewable energy, parallel efforts should be made to support the hundreds of workers who are about to lose their jobs, she told a climate change conference in Trinity College, Dublin.

Ms Robinson, who campaigns for climate justice, said the decision to get out of peat was the correct one as it was the worst of fossil fuels from a climate perspective and an inefficient form of generating energy.

She believed Bord na Móna should get out of peat sooner than 2028, as planned, while supporting efforts to reskill workers and generate new jobs in a low-carbon economy.

Spain could be an inspiration, she suggested, as it was about to close most of its coal mines having struck a €250 million deal with unions so “fear is managed and replaced by hope and opportunity”.

Ms Robinson agreed with the view that the severity of climate change and the number of people affected by it was going to increase until greenhouse gas emissions were reduced and carbon sinks were protected.

“Only a global movement could mobilise the transformation needed to prevent an irreversible climate crisis” and ensure a just transition for those detrimentally affected.

Limiting global temperature rise to within 1.5 degrees would save millions of people from its worst effects. She encouraged every citizen to make the climate issue personal to them, and to their family; to recycle, to reuse, to look at their consumption and to adopt renewable energy. This would put more pressure on politicians and governments to take more action in helping to realise a just transition to “a 1.5 degree world”.

She said the latest UN report heralded the end of fossil fuels because of their environmental harm, and they could no longer be justified ethically, adding that a just transition should not forget workers in the fossil fuel sector in efforts to save the planet.

There were too many examples of unjust transitions in the past, she recalled, notably how Thatcherite governments during the 1980s treated workers after coal mines were closed down in Britain.

The conference was organised by the Trinity International Development Initiative, Trócaire, the French Embassy in Ireland and the Institute for International and European Affairs – it showcased 27 climate action projects being undertaken in Ireland in energy, housing, finance and sustainable living.

The French ambassador to Ireland, Stéphane Crouzat, said two years after the Paris Agreement, France was concentrating on its delivery.

He said the upcoming UN conference of the parties -–COP24 in Katovice, Poland – needed to “adopt a set of rules and decisions that will enable us to swiftly and effectively implement the agreement”.

The French government had committed to a carbon tax increasing every year to more than €100 per tonne by 2030, and was spending €9 billion on solar energy within five years to try to make up the gap on its commitments.

“Recent international developments have confirmed the urgency to get mobilised, and I am delighted to see Irish individuals and civil society rise up to the challenge and propose creative solutions to tackle climate change,” he said.

“These initiatives show that climate change is not just a matter for governments; it is a matter for everyone...This is where we all enter into the fray.”