The Blackmouth Catshark is a deepwater animal, abundant in the north-east Atlantic, but under pressure from bottom trawling, and can lay up to 13 pups per litter. 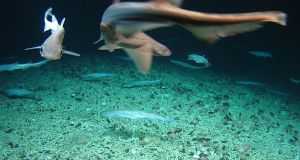 An image from a rare shark nursery filmed 200 nautical miles west of Ireland by Irish and British scientists in one of six offshore special areas of conservation. 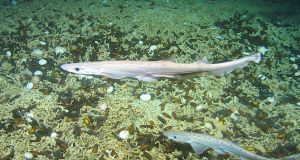 An image from a rare shark nursery filmed 200 nautical miles west of Ireland by Irish and British scientists in one of six offshore special areas of conservation.

A rare shark nursery has been identified by a team of scientists in one of the State’s marine protected areas some 200 nautical miles off the west coast.

A large school of Blackmouth catshark (Galeus melastomus) and a plethora of their mermaid’s purses or egg cases was filmed on the seafloor extending to 750 metres deep.

Both species are of scientific interest as both are on the International Union for the Conservation of Nature (IUCN) “red” list of threatened species. Ireland is obliged to monitor deepwater sharks under the Marine Strategy Framework Directive.

The Blackmouth Catshark is a deepwater animal, abundant in the north-east Atlantic, but under pressure from bottom trawling, and can lay up to 13 pups per litter.

The more threatened Sailfin Roughshark, which is also a deepwater species, may have been feeding on the eggs at the location, although the scientists say this was not observed by them.

The shark nursery was filmed during the State’s SeaRover survey in July, but video footage had to be studied further by scientists before its details could be confirmed at the State’s Infomar seabed mapping seminar in Kinsale, Co Cork on Thursday.

It was identified in one of the State’s six offshore special areas of conservation, and the scientists said that such large concentrations of egg cases are “rarely recorded and indicate females may gather in this particular area on the seafloor to lay their eggs”.

“This discovery shows the significance of documenting sensitive marine habitats, and will give us a better understanding of the biology of these beautiful animals and their ecosystem function in Ireland’s biologically sensitive area,” they said.

That three-week audit of the Irish deep sea environment extending up to 300 nautical miles off Galway had also identified gardens of rare and newly discovered deepwater “black” coral and an entire reef of sponges.

Plymouth University scientist Dr Kerry Howell noted it was first sponge reef of its type that she had seen in 20 years of studying the deep north-east Atlantic, and noted that such features may provide a new source of antibiotics.

Marine Institute lead expedition scientist David O’Sullivan and Prof Louise Allcock of NUI Galway had outlined several “firsts” recorded during the July trip, including the “black” coral, so called because of its black skeleton, and a species of “octocoral”, comprising large fans of coral with a fragile “porcelain-like” skeleton. Images captured on the Porcupine and Rockall Banks were recorded to a depth of up to 2,991 metres, using the Holland 1.

Marine Institute chief executive officer Dr Peter Heffernan said that the scientists had drawn on the best seabed map in the world in hitting a “bullseye”, discovering deep water coral, sponges, and now a shark nursery in areas up to 300 nautical miles west of Dingle, Co Kerry, Galway and Belmullet, Co Mayo.

“The scale of these discoveries by Ireland could hardly have been conceived when I was completing a PhD in Galway in the mid 1980s,” Dr Heffernan noted. He paid tribute to the EU’s European Maritime and Fisheries Fund for supporting three surveys commissioned and jointly funded by it with the State.

The surveys were co-ordinated and led by the Infomar programe, the extensive seabed mapping programme conducted by the Geological Survey of Ireland and the Marine Institute. Scientists from the Marine Institute were joined by colleagues from the National Parks and Wildlife Service, NUI Galway, Plymouth University and Aquafact.