Threat of climate change requires ‘revolution in how we live’, says Bruton 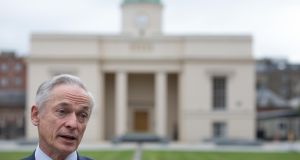 Richard Bruton: ‘I want to make Ireland a leader in responding to climate change, not a follower’. File photograph: Tom Honan

If Ireland is to respond adequately to the threat of climate change it will require “a revolution in how we live”, according to the new Minister for Climate Action and Environment Richard Bruton.

In his first statement on climate change, Mr Bruton said he was determined to make Ireland a leader in climate action, and announced he is to lead in the development of an “all of Government” plan which set out what actions every department must take in response to climate change.

The decisions taken now in tackling climate change would define the next century, he underlined at the climate innovation conference at Dublin Castle. “Ireland is far off course to achieve the C02 [reduction] targets which we have committed to. I want to make Ireland a leader in responding to climate change, not a follower. That will require a significant step change across government.”

Being a leader meant “acting now, stretching ourselves and seizing the enterprise opportunities in a low carbon economy, including the new circular and bioeconomies. Being a follower means the final costs of adjustment are much higher and opportunities much lower or completely lost”.

He added: “It will require a revolution in how we live. Every person, every community, every business, every home and every school will have to make changes in the way we live and work and learn. Nothing less will do if we are to make the changes that are needed to create a sustainable future for everyone.”

Given the scale of the challenge, there was a need for a growing political concensus on this, Mr Bruton said. “I intend to work with all parties and none, and with the Oireachtas Committee on Climate Action.”

The National Mitigation Plan was an initial first step to set Ireland on its way to decarbonisation but “by its own admission it was not a complete roadmap. We now need to move to undertaking that more detailed mapping of the journey we need to travel will be done”.

The central ambition of “the all of Government plan” would be to make Ireland a leader in responding to climate change. He would seek to work with colleagues in government to develop new initiatives across electricity, transport, heat, as well as a range of other sectors.

“The focus will be on implementation. We will identify actions with clear timelines and the steps needed to get there, and assign clear lines of responsibility for delivery,” he told the conference.