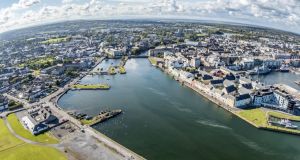 The proposed ring road will see the demolition of 44 homes with 28 of the affected homeowners making submissions as part of the oral hearing. Photograpg: Getty Images

Boston Scientific and NUI Galway have withdrawn objections to the proposed construction of a ring road in Galway city.

Concerns had been raised by Boston Scientific, the single largest employer in the west of Ireland, that the Parkmore Link Road, proposed as part of the N6 Galway City Ring Road, would damage its ability to expand its operation.

Speaking at the opening session of An Bord Pleanála’s oral hearing into the proposed ring road on Tuesday, Eileen McCarthy of ARUP Consulting Engineers said that plans for the ring road had been altered.

She said this change was made to allow the Boston Scientific campus “to properly evolve into a world class densely developed” facility.

Boston Scientific, which currently employs close to 4,000 people in Galway, has recently acquired the former site of American Power Conversion (APC), which is next to its main Galway facility in the Ballybrit Business Park.

Galway County Council has proposed the construction of a link road to prevent possible interference with the expansion of the company.

“Each expert assessed the new link road and the conclusion is that there are no significant impacts arising from this modification,” said Ms McCarthy.

NUI Galway also withdrew its objection to the proposed ring road, which will have an impact on its sports complex in Dangan. In a brief letter to An Bord Pleanála, the university did not indicate a reason for this decision.

It was also revealed that plans for the ring road at NUI Galway have been changed and the sports campus will now retain a GAA pitch, known as pitch nine, which would have been lost under the previous proposal.

Mike Evans of ARUP told the hearing that traffic congestion “is crippling and stifling city living” in Galway and cutting off access from the wider region to employment and services in the city.

“The total breakdown of the transport network in Galway occurs on a frequent basis as there is no resilience in the network for [COPING WITH]wet afternoons, road maintenance, in the event of a vehicle collision and during signage outage,” he said.

“The random, unpredictable shutdown of Galway’s transport network costs millions and has the real potential to prohibit Galway functioning as a city or economic engine for the Western region.”

A total of 296 submissions have been made in relation to the proposed ring road. Ms McCarthy said 280 of these raised concerns about the project while 16 were in favour of the proposed development.

The proposed ring road will see the demolition of 44 homes and 28 of the affected homeowners have made submissions for the oral hearing. All but one of these objected to the development and the demolition of homes.

“From the outset of the design of the proposed road development, every effort was made to avoid homes where possible,” said Ms McCarthy. “In some areas, clusters of homes are to be demolished which compounds the impact on the entire community and this is an unfortunate impact. It is acknowledged that it stressful to have your home demolished.”

This oral hearing is expected to be one of the longest running in recent planning history and is currently scheduled to sit for 28 days over the next eight weeks.

1 Covid-19: Easing of restrictions ‘unlikely’ to be speeded-up
2 Couple injured in shooting incident at farm in Co Waterford
3 ‘Frustrated and angry’: Thousands march in Dublin to protest death of George Floyd
4 Coronavirus: One more death in Republic as expert warns house parties are ‘disaster’ for containment
5 US protests continue amid curfews, arrest threats and plea from George Floyd’s brother
Real news has value SUBSCRIBE