Ethna Viney on parakeets in Fairview, an otter eating a lamprey and racoon oysters 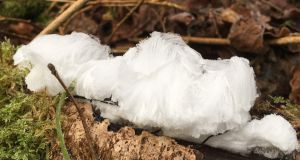 I came across this hoar frost in Glenisken Wood. What causes the ice or frost to grow like hairs? Donagh Kilworth, Co Cork

While walking near the Bannagh river on January 18th I found lots of hair ice. I understand that it’s associated with the fungus, Exidiopsis effusa.
Fionnbarr Cross, Bannagh Bed, Co Fermanagh

Hair ice forms on moist, rotting wood from broadleaf trees when temperatures are slightly under zero degrees and the air is humid. The hairs can maintain their shape for hours and sometimes days due to the presence of tannin and lignum from the wood. The fungus Exidiopsis effusa is associated with its formation.

I saw this starfish on Glassillaun beach. It’s much bigger than the usual ones I see on the beach. Sibéal Aspell, Renvyle, Co Galway

We’ve had visits from a pair of ring-necked or rose-necked parakeets.
Sean Barrett and Proinsias Mac an Bheatha, Fairview Dublin 3
The National Biodiversity Data Centre lists them as invasive aliens. They have become naturalised in London and the southeast of England. These could be escapees from confinement, or could have migrated here with or without help.

After the last storm, on a piece of rope on the strand, I found a racoon oyster, Dendostrea frons, from the Gulf coast of North America and the Caribbean.
Sabine Springer, Kinvara, Co Galway

Michael Allen took this photo of an otter eating a lamprey on the Suir near Clonmel. How common are lampreys in Irish rivers?
Niamh Mernagh, Marino, Dublin 3
There are three species of lamprey in Irish rivers: sea, river and brook. River and sea lampreys migrate from the sea to their spawning grounds in the rivers. This is a sea lamprey.