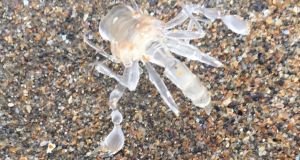 This little fellow hops up and down on my kitchen window. He appears to be looking for a mate. I notice his gold crest changes to red as he gets more excited. – Prue ffrench Davis, Brownstown, Navan
You’ve got a pair of goldcrests. The one with the gold crest is the female and the red-crested one is the male.

On Lahinch beach I spotted what I thought was a plastic bottle top. My dog had a sniff and a translucent shrimp-like creature popped out. – Nancy Cantwell, Quin, Co Clare
It’s a small crustacean called phronima, which rears its young in a barrel made by hollowing out the jelly-like salp. She will push the barrel full of offspring in front of her through the water and liberate them at the surface of the sea.

This frog was in our garden after dark on January 31st. Is that very early for it to be out and about? – Brian Ó Cuiv, Indreabhán, Co na Gaillimhe
That’s a pregnant frog full of spawn looking for a pond in which to breed.

There’s a very healthy colony of mallard on the river Dargle at Bray, but with a pronounced anomaly in the balance of the sexes. I saw two groups with a total of 14 drakes and three ducks. – Paddy Demery, Kilcoole Co Wicklow
Several factors affect the balance of the sexes in mallards, such as the supply of food. But males are notoriously aggressive and can kill females with their attention in the breeding season. So females remove themselves from aggregations of males.

I found this insect in my car and wondered if it arrived in some shopping, as I can’t find it in my insect books. – Janet Brady, Brittas, Co Dublin
It’s the great diving beetle.