Your notes and queries for Ethna Viney 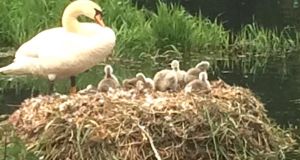 Swan and cygnets in Lakelands, grounds of Terenure College.

“We saw a proud mum with her cygnets in their nest .”

“This bee hawkmoth was feeding on snapdragon in my garden. Its wings are beautiful.”

It’s the narrow-bordered bee hawkmoth. I also had one from Niamh Ní Dhúill in Tralee, Co Kerry.

“This is one of four leverets that turned up at our house. The mother suckles them on the drive. They feed and play in the early morning and have several forms around the place. “

“What is this insect, which I saw on my garden wall?”

“I saw this chap in the garden early in May.”

It’s the spring hawker dragonfly and the earliest hawker on the wing.

“What is this flower, spotted in mid-May in my garden? The colour is extremely vibrant.”

“I snapped this cuckoo chick in my back garden in mid-May. It was being fed by a thrush.”

It is unusual for a cuckoo to lay her eggs in a thrush’s nest. More usually, in Ireland, she uses a meadow pipit’s or a dunnock’s nest.