Robinson has followed Mairéad, his wife and collaborator, into the list of Covid-19 fatalities 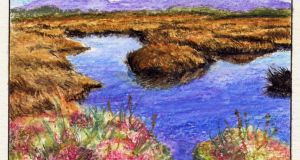 To stand with Tim Robinson on the peak of Roundstone Hill in Connemara, a sharp sun glinting on the lakes of the bog below, was to share his vision “as if half a sky had been shredded and strewn across black earth”.

Roundstone was his home for decades of exploring the land, and Connemara was still in his hopes as, hospitalised in London’s plague, he followed Mairéad, his wife and close collaborator, into the list of fatalities.

Perhaps, when the first tentative footfall returns to the Wild Atlantic Way, there will be some fitting outdoor memorial. In map after map and book after book, Tim Robinson created a unique ecological chronicle of the prime western landscape. Of his own ambition he once wrote: “I feel I have truly seen things as they are when I’m not there to see them.”

I first met him in Roundstone soon after he and Mairéad had left their first Irish years on Inis Mór and made a home in a former lace workshop overlooking Roundstone harbour and the distant Twelve Bens. Later, in the 1990s, I directed Folding Landscapes, an hour-long documentary produced and filmed by David Cabot and shown on RTÉ and Channel Four.

It took us to the landscape of Robinson’s most arduous map-making, on the windswept limestone hills of the Burren. He had traversed them by bicycle, staying in winter B&Bs to recover from days of walking the heights to map every square kilometre. He recorded everything, including lost monuments hidden in thickets of blackthorn, so that his “folding landscape” became uniquely valuable.

Returning to Inis Mór, he led us through the labyrinth of walled fields and over the secret stairs of stiles, His first map came to life beneath our feet and our camera was drawn inescapably to smaller and smaller detail of this “uniquely tender and memorious ground”.

We ended up focusing on tiny fossils in the rock – corals, sea lilies, brachiopods – the stuff of the early and omnivorous fascination poured forth in Stones of Aran. In his mode of walking a landscape, each step would fill this column.

The mathematics degree that so enabled his precise and inventive mapping was to give him delight in fractals, a rhyming in sets of numbers so often echoed in the forms of nature. The infinite pattern of similar shapes at progressively smaller scale, shown in everything from the branches of trees to the structure of a cauliflower, could be recognised in Connemara’s convoluted coastline.

This he lived out by walking every metre of the shoreline from Ros a’ Mhíl to Roundstone. The two villages are only some 30km apart, but so fractally fretted that the actual line where land meets sea unravels to at least 40km.

Retracing with Robinson some of this “wearisome muddle” of bays, we found that, indeed, their inner reaches, distantly inviting as “the roots of a marvellous silver tree” resolved into slimy shores of black mud tide-marked by gigantic heaps of khaki seaweed.

His gruelling but hypnotic marathon, pursued day after day, produced the powerfully heightened writing found in Setting Foot on the Shores of Connemara. It did not ignore the obstacles of human archaeology recorded at the ends of fences and drains, the little improvised quays, the stone-pile walls to keep the cattle in.

The intimate richness of the landscape’s human history, explored through learned Irish, deep research and recording of innumerable encounters, give all of Robinson’s books great cultural value. An early desktop computer on his desk in Roundstone kept track of a mass of knowledge, later donated to the archives of NUI Galway.

It also distinguishes his Connemara maps, incorporating thousands of placenames. Many were salvaged in wayside conversations and confirmed by searches in official records. He relished this oral topography – “that mysterious and neglected fourth dimension of cartography which extends deep into the self of the cartographer”.

Such feeling for the human use of landscape led Robinson into controversy as he opposed, at the peak of the Celtic Tiger in the mid-1990s, a commercial project for a new tourist airport on 13 acres of Roundstone Bog. As a rare, surviving and intact stretch of oceanic lowland bog it had, he said, “no parallels anywhere on the Earth”.

The airport did not proceed. But there was little check to Connemara’s invasion of holiday homes. “All year round,” he noted, “the sound of the rock-drill is heard in the land . . . A suburb without an urb is coming into existence, a centreless anywhereville.”

The drills, one would guess, have ceased for the moment. And any of his books, read in lockdown, will share a life of inquiry and experience that was immensely worth living.