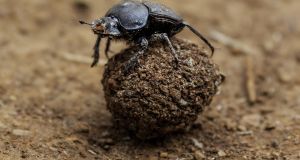 When Eye on Nature was launched on this page in 1988, queries about beetles came by post, often with little drawings on the letters. Today, on sunny lockdown days, a prowl in the garden with a phone camera has yielded yet more coleoptera, slowly locomotory or paused in thought.

Colourful shield bugs and ladybirds on summer leaves, longhorns perched on roses, diving beetles gliding through garden ponds, maybugs thumping on to garden tables... all have brought endless queries for a name.

At the same time – and this may, perhaps, surprise you – some 40 Irish farmers have been roaming their cattle pastures, kicking apart the drier cow pats and peering into their depths. Retrieving small black beetles from their sticky weave, or floating them in a bucket of water, they have brought them home and put them in the freezer to send, in due course, to Bruce Thompson.

Young, married, with two children, Thompson works with his father running a dairy farm with 230 cows on the slopes of the Slieve Blooms in Co Laois. Most farmers of that size, concerned about the cows’ internal parasites, inject or pour on costly quantities of a “worming” drug, notably ivermectin.

This does, indeed, kill cattle parasites, but also emerges unchanged in their dung, with lethal impact on the larvae of dung beetles. There are parts of the insect community that can make cow pats disappear into the soil, sometimes in days, their nutrients recycled for plants to grow.

Googling dung beetles brings up fascinating photographs of individual beetles rolling balls of dung uphill with their hind legs. Many tropical species do, indeed, pose for pictures in this manner. Ireland’s largest dung beetle (the dor beetle in my drawing) is content to dig a vertical burrow beside the cow pat and lay eggs at the bottom, together with pellets of dung for the larvae to recycle as food.

Most of the decomposition, however, is done by tiny dung beetles a few millimetres long, These are mainly the Aphodius family, which lay their eggs beneath the dung’s surface. A study by scientists at Teagasc and UCC found that, in cow pats with a tiny trace of the anthelmintic drug ivermectin, the toll on the development of beetle larvae was substantial.

Bruce Thompson had a keen interest in soils and their wildlife and was equipped with his own microscope. He decided ,with his father, to minimise dosing with “mectins” to give young stock a chance of developing their own immunity to parasites. With a more diagnostic approach, the dosing was phased out for the adult cows and they have had none of the drug since 2017.

A chance conversation with a UK entomologist fired Thompson’s interest in further study. With more encouragement from Aidan O’Hanlon, entomologist at the Natural History Museum, he sought a research scholarship from the Irish Nuffield Foundation.

It took him to Australia and New Zealand, where the introduction of alien dung beetles has been helping to rescue cattle farming from pastures polluted with undecomposed manure.

Australia’s native dung beetles evolved with the droppings of kangaroos and wallabies, not cattle. The government has subsidised the establishment of colonies of dung beetles from Hawaii, Africa and Europe. In New Zealand, packages of beetles are offered commercially to set against the costs of riverbank fencing and planting to curb the run-off from dung.

The case for conserving coprophagous coleoptera has been strengthened even further by a large-scale field trial in southwest England. Researchers at the University of Bristol set out some 250 1-kilo cow pats of parasite-infected dung. Those exposed to Aphodius beetles left lower numbers of parasites in grass around the pats. Such findings, reported in the Journal of Applied Ecology in August 2017, demonstrated to Thompson that the beetles were helping him to lower the need for ivermectin.

It encouraged him to launch “Operation Defecation”, meant to build a baseline of the types and prevalence of dung beetles on farms with different practices of “worming”. Dissolving chunks of dung in a bucket of water can bring a dozen different species of beetles floating to the surface.

Thompson’s recruitment of farming volunteers has been helped by his involvement in local farming groups and an appeal on Twitter headed “All good things come in poos!” (@Friesian_man).

His “citizen science” sampling is undertaken in the hope that intensive farming can be partnered with respect for the natural ecosystems of the soil. For Teagasc’s researchers, the quest is for evidence “that informs satisfactory trade-offs between conservation targets, animal welfare and livestock production”.

In the meantime, perhaps, as the Bristol research paper concludes: “Livestock management practices should focus on reducing reliance on anthelmintics to minimise damage to natural dung beetle populations.”