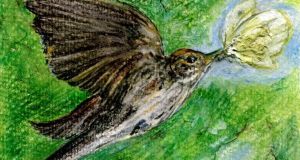 Last year it was the mistle thrush that grabbed me – my affectionate attention, that is. Each morning as I marched out to measure the rain, he was perched on the gable’s broadband aerial and facing the sea in a full-flow performance.

I’d stand beneath him, carefully still, admiring the measured, forceful phrasing, the avian oratory. His song carries, by some accounts, a couple of kilometres. And at length, his final, territorial peroration concluded, we could both move on.

This year there have been distractions, among them the compelling entry of a little bird whose song (“ a few thin hasty notes”, as my field guide allows) is quite lost beyond my double-glazed bedroom window.

This looks out to a low-fringed glade of rough grass and shady trees, oak and alder intertwined. For the spotted flycatcher, Muscicapa striata, it is the perfect arena for the ceaseless, urgent practice of his name.

Many birds catch insects in the air – our swallows are at it all the time – but none behaves quite like the flycatcher.

Distracted from Thomas Cromwell’s devious doings at Henry’s court, I gave way to tracking the flycatcher’s own, quite hypnotic, manoeuvres

He chooses a perch on a twig with a view – it can become a daily favourite – and makes repeated, looping forays to seize his prey. The energy involved is impressive: a flurry of wings in a diving take-off, an arrow-swift glide to snap up the target, an instant turn and flurry of wings to propel him back to his original parch.

This manoeuvre, made over and over at different trajectories and distances and flashing in the sun, kept catching my eye as I lay reading in bed, the mammoth third volume from Hilary Mantel propped up on a beanbag. Distracted from Thomas Cromwell’s devious doings at Henry’s court, I gave way to tracking the flycatcher’s own, quite hypnotic, manoeuvres.

It was the first such visitor in many years, migrating from a humid zone of west Africa by way of northern Spain. As perhaps the last of the summer’s arrivals in Ireland, what chance had drawn it to this one wooded acre on a sheep-shorn coastal hillside?

Here in a gloom-laden west, last summer offered few flying insects: even the midges lay low. The contrast this year, boosted by the sun, just about sustains the bird’s hard work, together with the swoops of the swallows. Despite its name, mere flies are mostly for chicks in the nest, somewhere in a shadowy crevice. But the energy for ceaseless interception demands meatier fare – butterflies, moths, craneflies, damselflies, even bees or wasps, their stings scraped off on the twig.

Other migrants from the flycatcher’s winter habitats in Africa have suffered severe declines, so bigger answers may lie there, in climate change or deforestation

To read about birds these days is to expect more tales of decline. The British Trust for Ornithology reports an 89 per cent reduction in spotted flycatchers between 1967 and 2010. Ibis, the international journal of avian science, has added “great conservation concern” about the species.

In Ireland, a new survey of countryside birds suggests a continuing fall in breeding flycatchers, perhaps of a quarter over the past couple of decades, and notably in the east midlands. Theories include predation of nests, perhaps even by grey squirrels, but other migrants from the flycatcher’s winter habitats in Africa have suffered severe declines, so bigger answers may lie there, in climate change or deforestation.

The Countryside Bird Survey is important and readable. Co-ordinated by BirdWatch Ireland, it’s the product of thousands of hours of fieldwork, mainly by volunteers, but also by the National Parks and Wildlife Service, which publishes it online (npws.ie) as Irish Wildlife Manual 115. It tracks the fortunes of the common and widespread breeding birds between 1998 and 2016. That this now excludes the lapwing and curlew, from the difficulty of finding them, is a measure of their loss.

The survey does correct a few popular notions about the loss of birds, not least my own casual belief that Ireland’s cuckoos shared in the UK’s long patterns of decline. “Perhaps surprisingly, in light of at least anecdotal evidence,” says the report, “the CBS shows a positive population trend of nearly 19 per cent.”

On average, cuckoos have been recorded in 74 of the survey’s spread of 1km squares per year. These could certainly, this spring, have included our own hillside. One (or more?) cuckoos has been giving forth, almost non-stop through late May, to the weaker, counterpoint chorus from collared doves.

One day I watched as a cuckoo, harried by a little mob of pipits, took refuge in the crest of the old Sitka spruce at our gate. She re-emerged from the dark canopy almost immediately and fled stage-left, still pursued by pipits. She may, of course, have met the mistle thrush’s mate, indignantly at home on the nest.