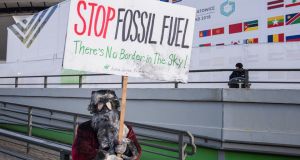 Ireland’s ranking as the worst performing country in the EU for action on climate change, for the second year in a row, was roundly criticised by environmental groups, Irish aid organisations and Opposition parties.

Responding to the latest Climate Change Performance Index (CCPI) rankings, a spokeswoman for Minister for Climate Action and Environment Richard Bruton said he had already highlighted “Ireland is far off course in our response to climate change”.

She said that since being appointed, Mr Bruton had secured Government approval to develop a plan to make Ireland a leader in responding to climate change.

“This plan will have actions across all sectors of society and will have timelines with clear lines of responsibility. This report reinforces the urgency of this work,” she added.

Speaking in Poland, Trócaire policy adviser Cliona Sharkey said the passage of the Fossil Fuel Divestment Bill this year demonstrated “elected representatives know and accept that the vast majority of fossil fuel reserves must remain unburned if we are to deliver on the temperature limits adopted in the Paris Agreement”.

“It’s clear however that policy makers must do much more now if Ireland is to move from laggard to leader as the minister has recently committed to, and leave behind the very poor performers category in the Index,” she added.

Ms Sharkey said this was in the interests of all Irish people, “and given the devastating impacts of climate change on the poorest women and men in the world who are being hit hardest by a problem they have not caused, it is a basic question of respect and justice”.

Jennifer Higgins, policy and advocacy adviser at Christian Aid Ireland, said citizens had called consistently for more action, with “a willingness to take on the radical changes we need to see domestically to tackle climate change”.

It was time for Government ministers “to wake up and listen, not only to the science and to the criticism we continually face at the bottom of the pack, but also to the people, both at home and in countries worst affected by climate change”.

An Taisce’s climate change committee spokesman John Gibbons said the NGO sector has long warned the Government that failure to squarely address climate change as a political priority would have dire consequences.

He said that to be ranked as the very worst in the EU28 was “a stunning indictment of political failure to stand up to powerful special interest lobbyists as well as refusing to face down huge complacency and inertia within the public and semi state sectors”.

Labour leader Brendan Howlin said hard policy decisions on climate action were needed from the Fine Gael Government. “The findings Index are shameful for Ireland. Not only are we the lowest ranked member of the EU, but Ireland is the only European country in the fifth and bottom category of countries, which are the least likely to live up to their responsibilities on climate change.”

Independent TD Thomas Pringle noted the index “lists Ireland alongside Russia, Korea and Saudi Arabia as one of the worst performing countries in the world when it comes to climate action”.

He welcomed, however, acknowledgment in the CCPI report of his Fossil Fuel Divestment Bill. “Not only does the Bill provide a symbolic show of strength by a small country against global fossil fuel companies, it’s also actively influencing climate change policy on an international stage,” he said.

Fianna Fáil environment spokesman Timmy Dooley said Ireland’s poor showing was “indicative of the Government’s abject failure to take seriously the threat of climate change, and to prepare for the wholesale changes that are required to meet our international obligations to protect our planet”.

Green Party leader Eamon Ryan said fault for Ireland’s poor showing lay with the Government as the State’s poor rating was due to the lack of a coherent national climate policy.

“The only thing holding us back is a lack of leadership in Dáil Eireann. That has to change,” he said. “If we can get agreement on the basic building blocks of our new plan, we will restore our reputation. Doing so will ignite a new economy which helps build our sense of community.”

She said the Dáil should also pass the People Before Profit climate emergency Bill without delay “so that we can show to the world that as a country we are taking climate change seriously and we want to be leaders against rising global temperatures and species loss”.

SVP urges election candidates to commit to eliminating poverty 13:29
Social Democrats to ‘radically scale up’ number of new homes 13:07
Election 2020 outtakes: McHugh’s as tough as nails 13:00
Girl settles case over head getting trapped in electric gates for €20,000 12:52
Election 2020: ‘We all think the health service is a lost cause’ 12:26