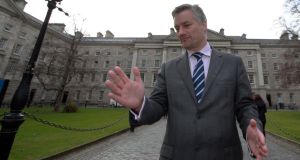 Provost of Trinity College Patrick Prendergast: said a tweet was widely circulated stating that the college had bought him a penthouse apartment at a cost of €1.95 million. Photograph: Nick Bradshaw

The provost of Trinity College, Dublin, has criticised the role of social media in spreading “fake news” during recent protests by students at the university.

Dr Patrick Prendergast said a tweet was widely circulated stating that the college had bought him a penthouse apartment at a cost of €1.95 million.

“Anyone with even passing acquaintance of Trinity would know to laugh, but the story was picked up by the national media.

“So, also, was the claim, also tweeted, that students were locked into the dining hall. One tweet I saw even said that armed guards were coming.

“Are these kind of patently absurd claims the ‘new normal’? Are we supposed to slide happily into a ‘post-truth’ era where people can put out this stuff with impunity?

“Should college officers have retaliated with claims that students were beating up professors and burning the library?

“Call me humourless but that doesn’t seem like any kind of a solution to me.”

He also said an “unsubstantiated allegation” was made against a leading candidate – Sean Ryan – in the recent students union presidential election, which was widely circulated on social media.

“It should concern all of us that precisely that which makes social media so effective – its reach and its speed – can also be used unfairly,” Dr Prendergast said.