Junior and Leaving Cert ‘at risk’ unless examiners' pay increased

Teachers back 30 per cent pay increase to avert ‘impending catastrophe’ 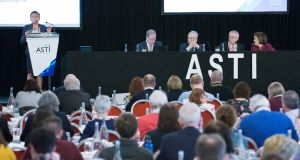 Secondary teachers say the integrity of State exams are at risk unless there is a sharp increase in pay rates for marking students’ work.

The conference heard the State Examinations Commission is facing an “impending catastrophe” due to shortages of examiners and superintendents who are willing to correct exams as a result of “draconian” pay cuts.

Delegates at the annual conference of the Association of Secondary Teachers Ireland (ASTI) voted unanimously for a 30 per cent increase in rates of pay for marking exams.

Payments to examiners for marking individual exam papers range from just over €4 to just over €32, depending on the subject and length of the exam.

However, teachers said their take-home pay amounted to “blood money” because tax hikes meant it was less than half of these rates.

Liam Hennelly, a teacher, told the conference that while he earned a gross wage of €5,000 for marking 340 papers during the summer months, his take home pay was just over €2,000.

He said he ran into the chief examiner for his subject area who asked why he had not opted to correct State exams last summer.

“I felt like Cuba Gooding Jnr in Jerry McGuire, I said: ‘Show me the money!’.”

Noel Hogan, a Monaghan-based teacher, said rising workloads and lower pay meant the future of State exams were under threat.

“This isn’t just about looking for money . . . it’s about protecting a part of our education system that has huge public respect. Let’s maintain the integrity of the State exams system.”

Another teacher said take-home pay for correcting Junior Cert scripts - which range from between €4.17 and €11.28 per paper - was “less than the minimum wage”.

Fergal Canton, a Kilkenny-based teacher, cautioned fellow delegates against seeking a 30 per cent pay increase on the basis it could be seen by the public as “grasping” and “self-serving”.

He urged delegates to support a 20 per cent pay rise instead.

“We are in an economic crisis and the cost will probably go to fees for our students, so be mindful of public relations and to be realistic.”

However, members voted overwhelmingly in favour of a 30 per cent pay claim, with some stating this would only see a take-home pay increase of about 12 per cent.

It said this year’s Leaving Cert oral tests, along with Leaving and Junior Cert music tests, will all be completed within the scheduled fortnight following the Easter holidays.

While the bulk of Junior Cert home economics practical tests will also take place during this time, a “small number” of schools will be visited by an examiner later than scheduled. It said all candidates will have been examined by April 27th.

“This situation has arisen due to a small shortfall in the number of available examiners for the scheduled fortnight,” it said.

“All schools have been notified of the detailed arrangements for the holding of the oral and practical tests in their schools.”