DIT’s new campus: ‘This is all about connections and making it work’

Over the coming years, some 20,000 students will be based at Dublin Institute of Technology’s sprawling new campus at Grangegorman. The biggest higher-education development in the State’s history will transform Dublin’s north-inner city. 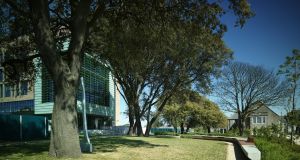 On a chilly midweek afternoon, the new Grangegorman campus feels a little empty and windswept.

“It’s quiet – I guess it will be much better when people live here,” says Alexandra Klimczak (20), a photography student, sitting on a bench and taking a break between lectures. “At least you can focus in the library, though.”

Sarah McNamara, a first-year student studying early childhood education, is one of the few students in the on-campus cafe.

“It’s a lovely, fresh new campus,” she says. “It’s very quiet for now, but I suppose that will all change.”

About 1,200 students are based in DIT’s new campus, which includes a number of old Victorian buildings which have been tastefully restored.

A gleaming new building, the Greenway Hub, is home to research and an incubation centre for start-up companies, as well as students.

Student numbers will soon begin to climb dramatically. Large-scale development due to get under way shortly will swell numbers to about 10,000 within two years or so.

The completed campus in Grangegorman will bring more than 20,000 students and 2,500 staff onto a single site within the next decade.

The office of Brian Norton, DIT’s president, is based at the old female penitentiary or Clock Tower building, which faces onto the Grangegorman site.

It’s an exciting time for the college, he says. For decades, Dublin Institute of Technology has been scattered across dozens of locations in the capital. Soon, everything will be based on a single campus.

While most universities tend to move out of a city as they grow, DIT is lucky to have a 73-acre site in the heart of the capital.

The development is a chance to reimagine how a modern college campus should be built. Instead of separate faculty buildings, for example, the college’s developments will be multi-purpose to promote greater collaboration across disciplines.

“We’re trying to avoid the silos of a building for this and for that,” says Norton. “So we’re giving buildings neutral names so activity can take place across them. The whole point of bringing this together is to get interaction . . . This is all about connections and making it work.”

These are big changes for DIT, which has evolved over more than 30 different sites, in various incarnations, over the past 130 years. The fragmented nature of the institution has held it back in the past, Norton says.

“We’re heaving at the seams in the old building due to student growth. At the moment, many students tend to go to a lecture and leave [the buildings]. Social life or cultural life is important, and with the new campus we’ll be able to provide all that.”

Playing fields occupy a large part of the new campus, while a theatre will be built at the new main entrance, which faces onto King’s Inns.

Another focus of the new development will be a shift away from the draughty lecture theatres of old to a much greater focus on outlets for group work and project work.

Quite apart from the new campus, major changes are on the way for DIT itself. It is set to become the first of a new batch of technological universities.

DIT, along IT Blanchardstown and IT Tallaght, are set to merge to form the country’s largest higher-education institution.

Under the changes, Dublin’s new technological university will continue to have campuses in Blanchardstown and Tallaght. Everything else will consolidate on the new Grangegorman campus.

Policymakers say the move will attract more research funding and international students, as well as delivering a stronger impact locally – and nationally.

Detractors, however, argue that the projects threaten to move DIT away from its strengths – such as practical teaching and industry-focused training – towards research and theory more associated with universities.

Norton says DIT – or whatever the new institution will be called – will stay true to its roots, but insists change is necessary.

“Ireland is unique in having one type of university,” he says. “In many jurisdictions, there are many types of institutions to meet different needs and ethos. We are involved in everything from apprenticeships to PhDs. This activity is copper-fastened in the [technological university] legislation. But our education needs to be more research-informed, as the transfer of research knowledge into new things is so rapid.”

Technological developments are taking place so fast, he says, that undergraduates could easily find their skills outdated by the time they graduate.

“Students will need to see knowledge not as a bound, fixed canon, but as a fluid thing which changes,” he says.

“I don’t have a crystal ball, but if we equip people with critical minds and equip them to make judgments, they can adapt in the future.”

Key details, however, remain to be ironed out – and there are tensions among senior staff that they have been kept in the dark over changes.

Norton says the focus to date has been on human resources issues and it is only now that talks are getting under way in detail on academic changes. He says he is not surprised by some of the concerns that have been expressed by staff and accepts that engagement could have been better.

He says a newly-established academic steering board, with representation from across the three institutes, is now working on developing detailed proposals to deliver on the academic vision of the new technological university.

“I would take it positively – they care, they want this to succeed. They wouldn’t want to get involved if they didn’t care,” he says.

“Evidently, we can do it better, and now we are doing so. You want an institution where people feel engaged and where they can contribute.”