Independent Alliance and Fianna Fáil say that pay must be restored 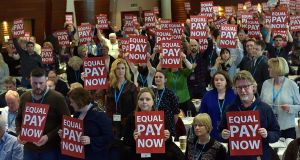 Delegates protest to Minister for Education Richard Bruton for equal pay at the Teachers’ Union of Ireland congress in Wexford on Wednesday. Photograph: Tommy Clancy

Minister for Finance Paschal Donohoe is facing pressure from within Government and from Fianna Fáil, whose support is needed to pass the budget, to end lower pay rates for newer entrants to the public service.

Independent Alliance Minister Finian McGrath has said bringing 60,000 public sector workers recruited since 2011 into line with the pay rates of those recruited before them is a “red line” for him in talks on the next budget.

“It is going to be a major issue to me,” the Minister of State for Disability Issues said. “These teachers are also teaching children with disabilities. It is a red line. We have to act on it and there is great potential to act on it in the next budget.”

Mr McGrath said Mr Donohoe – who will have about €3.2 billion to spend in the final budget of the confidence and supply deal – should be able to allocate the €200 million needed to deal with the issue.

Pay levels have come into sharp focus during the teacher union conferences this week, and Mr McGrath told The Irish Times the fact that those recruited in recent years were being paid less was leading to a shortage of teachers and was causing concern among parents. He said he will raise the issue at Cabinet next week.

His statement comes as Fianna Fáil public expenditure spokesman Barry Cowen said the Government was not restoring public sector pay at a quick enough pace. Fianna Fáil sources have previously said they want to see substantial progress in this budget on lower pay rates, although they stopped short of saying it should all be done in this budget.

Mr Cowen told RTÉ it was “taking place but not necessarily at the pace to meet the demands that have been placed on many of the young workforce”.

The Government concedes that pay levels should be brought into line but say it will take a number of years to do so.

However, with the Independent Alliance and Fianna Fáil increasing pressure ahead of the budget, Mr Donohoe and Minister for Education Richard Bruton may have to act quicker than anticipated.

Mr Bruton said the Government would approach new talks with unions in “good faith” but Ministers recognised “the constraints that operated on Government”. The issue of lower pay for staff recruited after 2011 did not only affect teachers, he said.

The Government is facing the prospect of strikes by teachers in both primary and second-level schools in the autumn if a resolution is not found in the weeks ahead.

While the public service agreement negotiated last year said State employees would receive an additional €870 million over three years, no provision had been made at this point in any budgets for the estimated €200 million cost of ending the two-tier pay system for recent entrants, Mr Bruton said.

Mr McGrath said it was a “broader issue” than just pay.

“Parents are saying to me they want consistency and stability in classrooms, where you have fully qualified teachers, professional people in there in the job and they are not depending on a shortage of teachers that is happening regularly to thousands of teachers every day.”