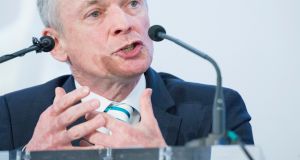 The Government wants to make progress in dealing with the two -tier pay system for State employees recruited after 2011, the Minister for Education Richard Bruton has said.

Addressing the annual conference of the Teachers’ Union of Ireland in Wexford the Minister said the union had “justifiable demands “ to see progress on new entrants pay.

He said talks would get under way on April 27th between the Government and unions representing 270 grades of staff across the public service on the two-tier system which sees those recruited after 2011 paid less than more long-serving colleagues.

Mr Bruton said this was a “clear commitment that the Government wanted to make progress”.

He said he hoped the talks would prove fruitful. During his address a number of delegates held up posters calling for “equal pay now”.