Student threatened to kick baby out of pregnant teacher 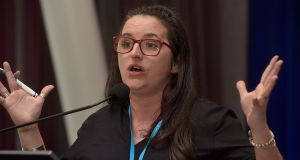 Audrey Cepeda told the TUI annual conference a student threatened a pregnant teacher that he would “kick the baby out of her”. Photograph: Tommy Clancy.

Teachers have called for more to be done to tackle violence in schools after it emerged that a student who told his pregnant teacher he would “kick the baby out of her” was allowed return to class the next day.

Several examples of intimidation, harassment, and assault suffered by teachers were given at the Teachers’ Union of Ireland’s (TUI) annual congress on Thursday.

Audrey Cepeda, an English teacher at a secondary school in Coolock, Dublin, said indiscipline issues at schools was not being addressed by management.

“Teachers would have objects thrown at them, nuts, bolts, cans of Coke, coins. Some might be pushed over, some maybe actually physically assaulted before anyone can intervene,” she said.

“Sometimes it can be verbal assault, where students are in a teacher’s face threatening them. This is in front of their class, they can’t get out of the classroom to seek help and they’re quite frightened, they don’t know if it is going to escalate further.”

In some cases, she said students were “sitting back in front of you” after incidents of violent or abusive behaviour.

Ms Cepeda said the lack of discipline was setting a bad example to other students.

“There was a pregnant teacher who had to challenge a student due to his behaviour. He got quite aggressive, the teacher challenged him, kept very calm, told him his behaviour was not acceptable.

“He went for the teacher and told her, I won’t use the explicit language, but that he was going to kick the baby out of the teacher.

“The teacher got quite frightened, and left the room. In that split-second, as a teacher, you’re thinking ‘I can’t leave the room because this guy is hyped up and aggressive, and I can’t leave that person in that room with 20 other students’, because obviously you have a duty of care to the other students.

“But this teacher felt she had no other option. She left the room and the student followed. She found a side room that she locked herself into and called the school office from her mobile phone,” Ms Cepeda said.

“He was back in the classroom the next day. Subsequently, maybe three weeks down the line he was suspended. But studies show that consequences need to be swift so students understand.

“Three weeks down the line they might have forgotten about it.”

A motion calling on the TUI to conduct a study of members to gauge the level of stress caused by a failure to properly discipline aggressive students was overwhelmingly carried by delegates.

Ms Cepeda, chair of the Dublin City branch of the TUI, said teachers feel they are being disregarded by school management when they bring these issues to their attention.

“We find that there are breaches right left and centre, codes of behaviours aren’t being followed and it is being put back on the teacher.”

Ms Cepeda said this then leads to teachers taking sick leave due to stress - but that they are afraid to put this on their sick cert. She argues that this means the true level of stress suffered by teachers is not appreciated due to under reporting.

The Association of Secondary Teachers Ireland (ASTI) has also said more needs to be done to protect teachers in the classroom and deal properly with indiscipline.

Moira Leydon, the union’s assistant general secretary, said that while there has been a big shift towards ensuring the wellbeing of students, there has been little focus to date on issues affecting teachers.

“Some principals are perceived as being weak in their response to violence by pupils. But in the majority of cases, it’s one of the priorities of the school,” Ms Leydon said.

She said a new “parent and student charter”, which will set out rights and entitlements of students and their parents, need to be accompanied by equivalent safeguards for teachers.

Ms Leydon said it was critical that the balance is maintained and that it does not happen at the expense of teachers’ right to a safe and dignified workplace.