Alarm at drop in ASTI membership to lowest in 15 years 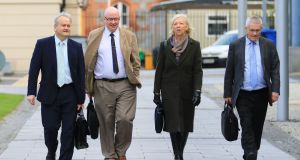 Members of ASTI’s leadership prior to a meeting at the Department of Education in late 2016. The union’s dispute led to a significant drop in membership. Photograph: Nick Bradshaw

Membership of country’s biggest secondary teachers’ union has fallen to its lowest level in 15 years, according to an internal report.

This drop occurred last year during a dispute between the Association of Secondary Teachers Ireland (ASTI) and the Government, which triggered pay losses for thousands of members.

The report, drawn up recently for the union’s executive or standing committee, shows membership fell “significantly” by almost 2,000.

When retired members are excluded and numbers are based on serving teachers , the contraction is “even more alarming”, the report notes.

The fall-off in membership comes as the ASTI is in dispute with the Teachers’ Union of Ireland (TUI) over claims that some of its members were “poached”.

Under industrial relations rules, rival unions are not permitted to hire members from each other during a dispute.

The TUI’s membership increased by at least 1,200 last year, according to Department of Education figures on the number of subscriptions taken at source from teachers’ salaries .

The TUI was not in dispute with the Government last year and its members were unaffected by these financial penalties. It has rejected claims that it knowingly hired ASTI members.

The Irish Congress of Trade Unions (Ictu) has confirmed that it recently established a special committee under its disputes procedures to deal with a complaint that had been made by the ASTI.

The ASTI’s internal report notes that the only membership categories to rise were retired teachers and those on leave.

This had the effect of accelerating the trend of retired members forming a growing proportion of the ASTI’s membership.

Retired members account for a significant proportion of members at the union’s annual conference – anywhere between 20 and 30 per cent .

Such “emeritus” members are entitled to vote on most issues, with the exception of ballots on industrial action.

When the drops in membership are analysed by individual branch, there are some striking differences.

The biggest year-on-year drop in membership was recorded in Fermoy, Co Cork (32 per cent); followed by Tuam, Co Galway (23 per cent); Tullamore, Co Offaly, and Dublin north central (both down 19 per cent).

Other sharp drops were recorded in Wicklow (20 per cent), east Galway (18 per cent), Cork south and Desmond – the Limerick/Kerry region (both down 17 per cent) and Dundalk, Co Louth (16 per cent).

The only branch to record an increase was New Ross, Co Waterford, where membership rose by just one (up 0.5 per cent) to 184 members.

When the membership is examined by school sector, some of the biggest decreases were recorded in community and comprehensive schools.