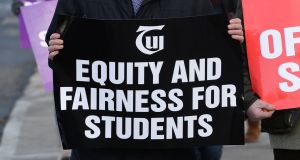 The union is currently balloting its 4,000 members in the sector to seek a mandate to engage in a campaign of industrial action. Photograph: Dara Mac Dónaill/The Irish Times

The underfunding of third level education has led to an “unsustainable” workload for academic staff in the Institute of Technology sector, the Teachers’ Union of Ireland (TUI) has warned.

The union says teachers’ workload “has long since exceeded reasonable levels” and has led to “significant levels” of work-related stress among academic staff resulting in the provision of an impaired service to students.

The union is currently balloting its 4,000 members in the sector to seek a mandate to engage in a campaign of industrial action over the issue.

The 16 hours currently required of lecturers and 18 hours required of assistant lecturers “have long been far above international norms,” the union says.

A planned review of an additional two lecturing above the existing requirements agreed with the union in May 2016 has not been completed, the union says.

“We are therefore currently balloting members for industrial action. The key element of this action is that members will deliver no more than standard lecturing hours (16 or 18) from the next academic year,”said TUI president Joanne Irwin.

“There remains a complete and incomprehensible absence of political will to deal with a funding crisis in the sector. As a result, students continue to suffer larger class sizes, sharp cuts to tutorial and student support provision and significantly curtailed access to essential facilities such as libraries and laboratories,’ she said.

‘The Institute of Technology sector has suffered devastating cuts to funding, which has had a severely damaging effect both on the working conditions of lecturers and the educational experience of a generation of students,” she added.

Speaking ahead of the TUI’s annual congress, which takes place in Wexford next week, Ms Irwin repeated the union’s call for the establishment of a dedicated levy on corporate profits to help fund third level.

“TUI has consistently made the case for a 1 per cent levy to be applied to corporate profits to generate a dedicated fund for higher education. As the corporate sector derives considerable benefit from Ireland’s graduate pool, such a levy would be wholly appropriate”, Ms Irwin said.

Such a measure “ would have raised an additional €588m for the sector in 2016 broadly in line with what authoritative analysis indicates as being required.”