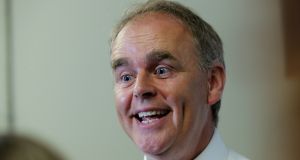 Minister for Education Joe McHugh has invited parents to help select patron bodies for new secondary schools in the greater Dublin area. Photograph by Crispin Rodwell for the Irish Times

The Islamic Foundation of Ireland is seeking to become the patron body of a new State-funded secondary school due to open in west Dublin next year.

While there are two Muslim national schools in the Dublin area, there is no State-funded Muslim secondary school in the country.

It is one of six new secondary schools due to open in the greater Dublin area next September where patronage is to be decided on foot of votes by parents.

The Islamic Foundation of Ireland is one of five patron bodies campaigning to run a new secondary school to serve the Blanchardstown village and west Blanchardstown area of Dublin 15.

The other patrons include Educate Together, the Irish-medium An Foras Pátrúnachta , Dublin and Dún Laoghaire Education and Training Board and Scoil Sinéad Limited, a multidenominational patron.

The Islamic Foundation of Ireland, based on Dublin’s South Circular Road, is the oldest organisation in the country which represents the Muslim community and has been campaigning for a secondary school.

Other places where new secondary schools are due to open in the capital next year include Harold’s Cross , Goatstown, Enfield and Citywest/Saggart.

In addition, new post-primary schools are due in 2020 at Kilcoole and Greystones, Co Wicklow, and Enfield, Co Meath.

Mothers, fathers and guardians of children who are due to enrol in secondary school from 2020-2024 in these areas are being invited to complete a new online survey (patronage.education.gov.ie). It will remain open until October 4th.

Parents can use the online survey to select which model of patronage they prefer and whether they want English or Irish as the language of instruction.

Minister for Education Joe McHugh said the Government was investing heavily in new schools to meet the needs of a growing population.

“But we need parents’ support to ensure we reflect the views of families in the areas where we have younger and growing populations,” he said.

“It is a great opportunity for mothers and fathers and guardians to help to shape the education of the future.”

He said the wishes of parents and guardians, together with the extent of diversity already available in these areas, will be key to deciding the type of schools we have in the future.

“I urge as many people as possible who live in the areas and have children going to post-primary in the next few years to make their voices heard,” he added.

Locations have been secured for three of the six new schools, all of which are subject to planning permission.

Among the patron bodies bidding to run some of the schools are Educate Together, An Foras Pátrúnachta and local Education and Training Boards and Scoil Sineád.

The patronage process for new schools is overseen by the independent New Schools Establishment Group , set up in 2011 to advise the Minister.