Mandatory purchase of iPads for school ‘forcing’ parents into debt

No financial support towards €800 cost of devices, Oireachtas committee hears 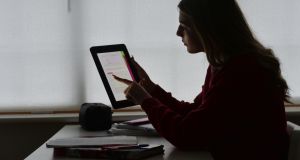 The cost of iPads and other digital devices in schools is a major issue for parents, say campaign groups. Photograph: Alan Betson/The Irish Times

School policies which require the mandatory purchase of iPads at a cost of up to €1,000 are forcing many hard-pressed parents to borrow money, according to parents and campaigners.

The Society of St Vincent de Paul (SVP) says it has recorded an increased in requests for support from parents where the purchase of digital devices is compulsory for students.

In most cases, it says there is no financial support in place despite costs averaging between €500 and €800. In some cases, parents have been requested to pay up to €1,000.

Marcella Stakem, policy officer with SVP, told the Oireachtas education committee on Thursday that the cost of these devices – along with books and other learning materials – is threatening to undermine children’s education.

“If children and young people do not have the materials they need to learn ... they cannot be expected to excel or enjoy educational opportunities. This really influences their experience of school and hinders their future,” she said.

Ms Stakem said it was vital that the State does more to ensure students can participate in school on an equal footing, regardless of their parents’ economic status.

The SVP was one of a number of groups who spoke at the Oireachtas education committee on Thursday to highlight the “crippling”cost of education for many families.

Children’s charity Barnardos said if the purpose of using digital devices was to defray the costs associated with books, this was not being achieved.

It said its surveys show the average book cost for parents of secondary-school pupils were €190 overall and fell by just €20 to €170 for those who were required to have a digital device as well as books.

In addition, the cost of the “voluntary contributions” came in for heavy criticism from parents’ groups and school managers.

Séamus Mulconry of the Catholic Primary Schools Management Association said school costs for parents were mainly determined not by schools, but by Government.

“The persistent and unconstitutional underfunding of the primary school system has led to a situation where the basic cost of running primary schools is now subvented to the tune of €46 million a year by parents,” he said.

The National Parents Council post-primary said it is receiving complaints from parents whose children have been denied school lockers, school diaries or access to activities because a parent has been unable to pay a “voluntary” contribution.

“Children are isolated and highlighted among their peers because of their parents’ financial circumstances,” said Paul Rolston of the parents’ council. “Such practice is a disgrace, totally unacceptable and must cease immediately.”

There were also calls for an end to State subsidies of more than €90 million for private schools at a time when the broader education system is under pressure.

Sinn Féin Senator Paul Gavan said that, while we claim to prioritise the needs of children, the State has consistently prioritised the needs of fee-paying schools.

The committee also heard that the system of State grants for third level is not enough to meet the real costs of higher education.

The Union of Students of Ireland called for more flexibility to provide support when there is a clear need, even if a student has not fully met each individual criteria required.

The Irish Second-Level Students’ Union said the inability for under-23s to be classed as “ financially independent” is a major issues, especially where young people may be estranged from their parents.

She said most asylum seekers are categorised as “international students” and face costs of up to €20,000 to attend third level.

Yet most of these students are living on less than €40 a week in the direct-provision system.

“The current system as it is designed is effectively preventing students in direct provision from progressing past second-level education,” she said.