‘There’s more to do here than people think’: Trading the city for Cape Clear 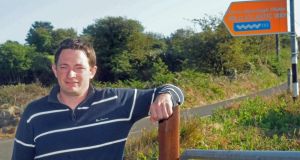 It is a year since Shane O’Neill bucked the trend of twenty-something professionals who flock in their thousands to urban centres in search of promising careers.

Turning his back on the bright city lights, the 29-year-old moved last October to the remote island of Cape Clear, 13km off the west Cork coastline, to take up a teaching position at the island school.

The previous summer the board of management at Scoil Náisiúnta Inis Chléire had advertised for a school principal and a teacher after their existing teachers retired, amid fears for the future of the school if these positions could not be filled.

At the time, Shane O’Neill had been working as a substitute teacher for several years in Cork city and nearby Midleton.

I could still have my nights out in the city at weekend, plus I’d also have a minimum of three hours a day back, to do the things I’d like to do

He had moved to the city shortly after graduation anticipating a busy urban life but found the reality a bit different.

“I thought I’d be going out a lot with friends, but when I was actually living in the city I found most of the time you wouldn’t go out much during the week.”

Soaring rental costs eventually forced him back to live with his parent house in the west Cork town of Dunmanway. However with a 150km round-trip at one point, that wasn’t ideal either, costing him €120 a week in fuel.

“Sitting in traffic to go through the Jack Lynch tunnel every morning became depressing.”

Meanwhile teaching friends who like him, had originally based themselves in Cork city, had gradually begun to emigrate to Australia, Dubai and Abu Dhabi, driven out by the high cost of living.

The appeal for school-teachers on Cape Clear gave O’Neill pause for thought.

An enthusiastic sailor, and a lover of nature he was familiar with the west Cork islands, and the thought of living and working on one was increasingly attractive.

“I realised that I’d have to keep myself occupied mid-week, but I’d been doing that for years in the city anyway.

“I could still have my nights out in the city at weekend, plus I’d also have a minimum of three hours a day back, to do the things I’d like to do.

“With technology improving all the time and connectivity becoming better and better it’s easy to stay in contact with family and friends and keep up to date with the latest news, programmes and films.”

His application for the job was successful; he rented a house on the island for the school year, teaching the senior classes as Gaeilge, while principal Niamh Keogh took the junior pupils.

“I have a comfortable one-bedroom house to myself for €100 a week. I’d be paying at least double that in the city.”

The house was within a five-minute walk to the school, shop, pubs and pier.

“Now that I live on the island I actually plan my weekends and organise things far more than when I lived in the middle of the city.

“I also have more disposable income. I don’t miss the bright lights”.

“The mobile phone signal on the island is very good . . . I don’t feel cut off at all.

“You can get Netflix and Amazon Prime no problem,” and most of his friends are now working abroad so he can still contact them by Skype.

Over the year, he settled into the island community and enjoyed its healthy social life, attending regular film nights, playing badminton and going kayaking and even helping out with construction work on the new island distillery.

Island life is lived at a slower pace than life in the city, he says, but he enjoys it:

“If you want general groceries you can get them from the local siopa, but if you want a major shop you can order it online from Fields Supervalu in Skibbereen or phone it in and it arrives on the ferry that evening.

“There’s a great sense of community on the island . . . there’s more to do here than people think.”

Long-term, he’d like to buy or build a house on Cape Clear and says there is a major shortage.

However for those who can overcome the housing problem, a good life awaits: “People sometimes assume that moving to a rural area will be isolating, quiet and a serious challenge. It’s only when you try it that you realise the benefits that come with it.”