Parents of pupils say their marks were unfairly reduced 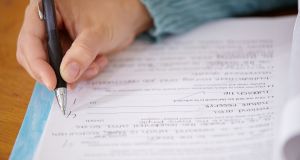 Agricultural science students are not allowed to appeal the results of their practical project which is worth 25 per cent. Photograph: iStock

Parents of students at south Dublin schools are threatening legal action against the State Examinations Commission (SEC) over its refusal to allow pupils appeal the results of a Leaving Cert exam.

Under the commission’s rules, students are entitled to appeal their grades for all Leaving Cert subjects.

However, agricultural science students are not allowed to appeal the results of their practical project which is worth 25 per cent.

This is because project work is marked by the students’ teacher, rather than an external examiner (these rules also apply to the practical exam in music).

Marks for students’ project work may be adjusted up or down by the commission’s examiners if they are deemed to be out of line with national averages.

In the case of agricultural science students at the Dublin Academy in Stillorgan, its entire class was marked down across the board by 20 per cent in their project work.

Some parents say this resulted in their children unfairly missing out on their first preference college choice.

“I believe it to be a gross injustice for individual students to have their project mark downgraded by circa 20 per cent without being given the opportunity to have an individual assessment of her individual work,” said one parent, who declined to be named.

A legal letter sent by another parent states that the commission failed to “comply with both its constitutional obligations and its statutory obligations”.

“As a result, our client now faces a further year of intensive study to repeat his Leaving Certificate in order to realise his ambitions due to the failings of the SEC process,” the letter states.

In a statement, the commission said marking undertaken by class teachers was subject to a monitoring process to ensure it was in line with national standards.

These independent monitors visit schools, examine students’ coursework and interview a representative sample of pupils before awarding marks in line with “national standards”.

These marks are then compared to the initial marking undertaken by the class teacher. On foot of this, students’ marks may be “moderated” up or down.

In a typical year, marks awarded by about 30 per cent of teachers were adjusted, it said.

The commission confirmed that its rules did not allow for an appeal of the practical exam.

It said an appeal required a review of all of the evidence available to the original examiner.

“Given the nature of the assessment of the coursework element of this subject, such a review is not possible,” the commission said in a statement.

However, despite its public stance not to allow for appeals of practical work in agricultural science, the commission has in recent days agreed to conduct a more in-depth “examination” of the monitoring and moderation exercise.

This will involve a review of all of the documentation and students’ coursework retained in the school.

This is due to be concluded prior to the issue of the Leaving Certificate appeal outcomes next week.

“We’re very pleased that the SEC is making every effort to ensure there is a fair assessment and have taken the unprecedented step of undertaking a desk-based review of the projects,” he said.

About 6,000 students undertake the agricultural science exam, though it is believed the review applies only to schools where there have been complaints over projects being unfairly marked down.

Parents have argued that the across-the-board reduction of marks is disproportionate and unfair and means that some students stand to face heavier penalties in percentage terms.

Parents also say it is not possible that the monitor had time to examine in detail the work of all students.