Students stage walkout over lack of subjects being taught through Irish 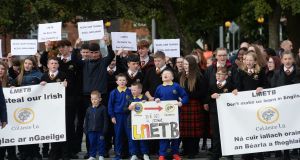 Students of Coláiste Lú, Dundalk along with parents walk from the school to the LMETB offices to protest about being forced to learn in English. Photograph: Alan Betson

Students at a school in Dundalk staged a walkout from their classrooms on Thursday morning over claims school authorities are limiting the provision of Irish medium education.

Expressing dissatisfaction and anger at the lack of subjects being taught through Irish at Coláiste Lú, students marched to the Dundalk offices of school patron LMETB (Louth and Meath Education and Training Board) to hand in a petition addressed to the its director of schools.

Coláiste Lú is an Irish-medium unit, or aonad, at the larger English-medium Coláiste Chú Chulainn. Units such as Coláiste Lú are provided for where the Department of Education has determined it is not feasible to establish a stand-alone Irish-medium post-primary school but where demand does exist for some Irish-medium provision.

Parents say they were left with little option but to protest publicly after a number of teachers left the school during the summer and Coláiste Lú students had to take lessons with students from the larger English-medium Coláiste Cú Chulainn.

Aidan Kinsella who is a parent at the school and is secretary of the parents committee, Comhairle na dTuistí de Choláiste Lú, said parents had previously been given assurances the core subjects would be taught through the medium of Irish.

He said the reduction in Irish-medium provision has had an adverse impact in particular on students preparing for exams.

Students currently in third and sixth year who had previously studied in an immersive Irish language learning environment now have to “relearn the entire syllabus through English and learn technical terms they hadn’t done before,” he said.

He said migrant parents who do not speak English in the home attended a recent committee meeting.

“They arrived in this country and made a commitment to the Irish language and they don’t have that natural English fall-back to be able to support their children when they are in an exam year learning new terminology. It is horrendous,” he said.

Parents of students at Coláiste Lú say the LMETB inherited a Gael Choláiste at its inception and has a responsibility “to promote and nurture” the Irish language. They are calling on the board to publicly commit to Irish-medium education at Coláiste Lú.

School principal Tomás Sharkey said he recently became aware of a shortfall in the hours allocated for special needs teaching provision at Coláiste Chú Chulainn/Coláiste Lú. Ensuring the needs of students are met with the resources made available by the department would be a challenge.

He said if the parents want him to provide this service the needs of students with learning difficulties would not be met.

“I have to use the teaching hours I have fairly, which means I cannot provide for tiny classes,” he said.

When asked about the walkout on Thursday morning, Mr Sharkey said: “The parents have made a decision not to send their children to school. That was up to them. We had 570 students in school this morning, without the Irish language students [present], they were working hard with an energetic, professional team in place and I commend their work.”

The LMETB said in a press statement: “The Aonad at Coláiste Chú Chulainn, Dundalk which was sanctioned by the Department of Education and Skills is being referred to by certain parents as Coláiste Lú.”

It said parents were advised previously that the department had not sanctioned a roll number for Coláiste Lú but instead “had issued formal recognition for an Aonad within Coláiste Chú Chulainn”.

“The Aonad is managed by the principal on behalf of the patron within authorised staffing limits,” the statement added.

It said that “similar to other schools nationally”, it experiences difficulty in securing teachers in certain subject areas including mathematics, sciences, modern foreign languages, technology subjects, guidance and SEN “to name a few”.

It said it was “not in a position to commit resources sanctioned for other students to meet certain expectations expressed by parents/guardians of students attending the Aonad at Coláiste Chú Chulainn, Dundalk”.