Row over move to designate new schools as Gaelscoileanna 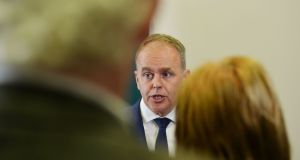 Minister for Education Joe McHugh said he wanted to help address the imbalance in the availability of Irish-medium education. Photograph: Alan Betson

Changes to the criteria used to determine the language and ethos of new schools have been welcomed by the Coimisinéir Teanga (Irish language ombudsman) and Irish language education providers.

The far-reaching changes which are designed to improve access to Irish-medium education were announced by Minister for Education Joe McHugh.

The new criteria will ensure that Irish-medium schools will now be established in areas where new schools are planned, once no pre-existing Irish-medium provision is available.

Where a number of new primary schools are due to be established in the same school planning area during the period 2019-2022, at least one of these will be established as an Irish-medium school.

Once a school has been designated as an Irish-medium school, an online patronage process system for that area will be opened to patron bodies who wish to apply to run the school.

The country is divided into 314 school planning areas which are geographic areas used by the Department of Education to take account of local and regional variations in demographic trends and enrolment projections.

Of 13 new primary schools due to be established from 2020-2022 under the new criteria, five are being designated for Irish-medium education.

“The announcement that the evaluation criteria for the patronage process are being changed is a positive development that will benefit Irish-medium education,” he said.

“It should also be ensured that the measures introduced by the Department of Education and Skills meet the extra demand for Irish-medium education and that is a matter that is still being discussed with the department,” he added.

The changes are part of a framework being developed to increase the provision of Irish-medium education through the establishment of new schools and by expanding existing gaelscoileanna.

At present fewer than 5 per cent of primary schools are gaelscoileanna.

Mr McHugh said he wanted to help address the imbalance in the availability of Irish-medium education and added that changing the criteria would allow some schools to be designated as Gaelscoileanna.

This, he said, “will provide more choice for parents and children and it will give them better certainty about the availability of Irish-medium education for their children”.

An Foras Pátrúnachta, the largest patron of gaelscoileanna in Ireland, welcomed the announcement. Caoimhín Ó hEaghra, Ard-Rúnaí of An Foras Pátrúnachta, said “the steps as outlined by Minister McHugh reflected an appreciation and understanding of the demand for Irish-medium education by parents.”

“It is already an issue for us that there is a need for more Gaelcholáistí [secondary schools], in that parents who choose a Gaelscoil at primary level also want total immersion for their children at second level. The lack of supply at second level is even more pronounced. That question hasn’t been addressed in today’s announcement.”

Citing research showing 23 per cent would choose an Irish-medium primary school for their children if there was one available, Ms Ní Ghréacháin said the decision shows how important it is to have a process to establish new schools that supports parents’ wishes.

“The revised process also supports the State’s policy to promote Irish and we hope that their vision will extend to immediate revision of the process to establish post-primary schools as well, especially with regard to ‘aonaid’, Irish-medium units in English-medium schools,” she added.

While the changes were widely welcomed by the Irish language education providers, Educate Together – which is the patron body for some 109 English language schools in Ireland – said the changes could result in the provision of “less choice for parents”.

The patron body said it noted the decision that five new primary schools are to be designated Irish-medium schools “with some surprise”.

“Arguably, today’s development could significantly alter the schools patronage process and provide less choice for parents in these areas as they will now no longer have the option to choose the language of instruction for their school.

“In effect the parental choice has been curtailed in five communities as announced today,” it said.

The changes come on foot of a revision by the Department of Education of the policy used to award patronage of new schools following an investigation into the school patronage process by the office of An Coimisinéir Teanga.

The investigation found that the language provisions of the Education Act had not been fulfilled in the process used to appoint a patron.

The Department of Education subsequently agreed that the policy would be revised “to give additional regard to parental preference for Irish-medium education.”

In a statement issued by the office of the Coimisinéir Teanga, Mr Ó Domhnaill said the implementation of recommendations “are a matter of ongoing discussion with the Department of Education and Skills”.