Minister wants to know ‘what happened, what went wrong [and] who’s responsible?’ 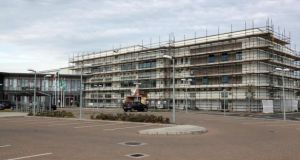 The board decided to close part of Ardgillan Community College in Balbriggan immediately for health and safety reasons, and temporary accommodation is being sourced for 200 students. Photograph: Collins

Some schools were built too quickly during the Celtic Tiger years which is part of the reason for the urgent structural safety assessments being carried out in up to 30 schools, Minister for Education Joe McHugh has said.

It emerged on Monday that 30 schools built by Western Building Systems (WBS) need to be structurally assessed after sections of a north Dublin school were closed this week due to safety concerns.

Nearly 100 transition year students from Ardgillan Community College in Balbriggan were told to stay at home this week after structural problems were discovered in the school building.

Several of the 30 schools to be examined schools were delivered under a rapid-build government programme in 2008.

This is the second review of schools built by WBS. In September last year the Department of Education announced plans to conduct fire safety reviews of 25 schools built by the Tyrone firm. This review followed audits that found fire safety defects in five schools the contractor built.

Speaking on Tuesday, Mr McHugh said in 2007 and 2008 there was “a missive coming from the government at the time and the department to get 30 schools built within a 12 month period.

“Certainly the litigation processes going on at the moment will help inform us. I would also reach out to WBS today - if there are mitigation measures to be rectified, there has to be a responsibility there as well.

“They’ve been asked, in the first place, to do that work. If that doesn’t happen we as a department have a responsibility to do that and we’ll follow up on who pays.”

The problems came to light when extensive assessment of fire safety regulations was carried out in 55 schools, 30 of these built by Western Building Systems.

“There has been varying degrees of deficiencies and shortcomings in relation to general fire safety. As a result of these assessments, it was decided it was necessary to look at invasive work within the walls, even though Ardgillan was outside the 55.”

“My first concern is the pupils, the teachers, finding solutions if pupils have to be decanted from schools.”

There is also an examination being carried out on the Tyrrelstown Educate Together in west Dublin.

“We have to establish a trend and will have to see the outcome of the Tyrellstown investigation - if today shows up that there are issues in that school, certainly we are going to be anticipating that there will be more. That doesn’t mean there will be issues in all of them,” Mr McHugh said.

He said the department will speak to each schools individually to see what arrangements were required for this week and next week, in terms of more invasive work in the walls.

The Minister said there was a possibility students at other schools will also be asked to stay home, “we will be informed now by engineering assessment of other schools.”

However, since 2015, the firm has been awarded contracts to build a Gaelscoil in Firhouse, and “rapid build modular homes” in the Dublin area.

The company has previously defended its work on the school projects, and claimed it was not responsible for fire safety issues.

It said work carried out by “other contractors subsequent to our handover” may have led to defects or breaches of regulation. A spokesman for the firm did not respond to requests for comment on the announcement of the structural safety review.

Taoiseach Leo Varadkar, meanwhile, has pledged to ensure the State will pursue construction firms for costs relating to any repair works.

“ Our first priority of course is the safety of children in schools and also the safety of staff so we’re going to do everything possible in the next couple of days first of all to make sure that children and teachers are safe and secondly to find out what defects exist, repair them as soon as possible and obviously pursue the construction company for any costs,” Mr Varadkar said.

“One of the schools affected is in my own constituency. It is something I’m very much across and we’ll do whatever we can as quickly as possible to make sure that everyone is safe and any repairs that need to be done are done.”