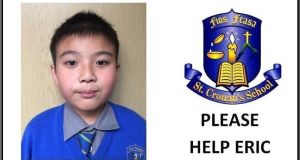 A primary school has appealed to the Minister for Justice to prevent the deportation of a nine-year-old pupil.

Eric Zhi Ying Xue, a fourth class pupil at St Cronan’s in Bray, Co Wicklow, was born in Ireland but does not have Irish citizenship.

His mother is Chinese and has had her application to remain in the State rejected and now faces deportation.

St Cronan’s set up a public petition on Tuesday requesting that Minister for Justice Charlie Flanagan revoke the deportation order. By Wednesday afternoon it had attracted more than 20,000 signatures.

The school’s principal Maeve Tierney said Eric was a popular member of the class but was under acute stress from the deportation threat and was recently diagnosed with a peptic ulcer.

“He has a group of lovely friends and is very well integrated into the school and local community. He plays football, he does all things that boys do. He’s very much a part of Bray and the community.”

Ms Tierney said his classmates were “very upset and quite scared” that he could disappear from their lives.

She said the boy’s mother arrived here illegally in 2006 and became pregnant in May 2009.

His mother has since exhausted all legal avenues to prevent deportation, which prompted the school to launch an online petition.

“The response has astonished us. We’re overwhelmed and grateful for all the support,” Ms Tierney said.

The online petition states: “Eric was born in Ireland but is not an Irish citizen and has never been out of the country.

“If he is forced to go to China, where his mother was born, he will have no access to China’s health or education systems because he is not a Chinese citizen. This is a humanitarian issue – Eric urgently needs your support.”

Ms Tierney acknowledged that Eric’s mother broke the law in arriving here but called for a “humane response” from the Government.

“Yes, she is not here legally. But we want the Minister to use his discretion. This is about what is right and humane. He is an innocent victim in all of this.”