Fire safety audits had previously been ordered at the schools 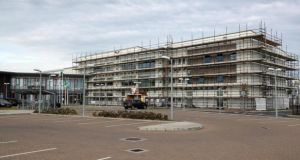 The board decided to close Ardgillan Community College in Balbriggan immediately for health and safety reasons, and temporary accommodation is being sourced for 200 students. Photograph: Collins

Urgent structural safety assessments are due to be carried out at 30 schools built by Western Building Systems (WBS), after sections of a north Dublin school were closed this week.

A second review of the structural safety of all the schools built by WBS over the last decade, will begin in the coming days. Several of the schools were delivered under a rapid-build programme in 2008.

Last month, the department also began legal action against the school builder over four schools, where remedial fire safety work has been required.

Nearly 100 transition year students from Ardgillan Community College in Balbriggan were told to stay at home this week, after structural problems were discovered in the school building.

Problems were identified during a fire safety audit on Friday, when the walls in two classrooms were opened up. It is understood the structural engineer found ties fixing the exterior and interior walls were absent or inadequate in places.

The board decided to close the building immediately for health and safety reasons, and temporary accommodation is being sourced for 200 students.

It is hoped a longer-term solution will be found in time for the resumption of school following the mid-term break.

A spokesman for the department said it was “currently commissioning additional urgent structural assessments in all of the schools where building projects were completed by Western Building Systems”.

“At all times the number one priority of the department is the safety of students and staff,” he said.

However since 2015, the firm has been awarded contracts to build a Gaelscoil in Firhouse, and “rapid build modular homes” in the Dublin area.

The company has previously defended its work on the school projects, and claimed it was not responsible for fire safety issues. It said work carried out by “other contractors subsequent to our handover” may have led to defects or breaches of regulation. A spokesman for the firm did not respond to requests for comment on the announcement of the structural safety review.