What’s it like to be right wing at a liberal Irish university in the age of Trump? 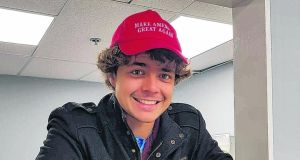 David Byrne is regularly seen wearing his red “Make America Great Again” cap around the University College Dublin campus, with a string of Nigel Farage badges pinned to his satchel.

College campuses in the US and the UK have seen the rise of a new kind of provocateur-style conservative politics, opposed to what is described as the liberal bubble of left-wing “snowflakes”.

But to what extent is there a growing popularity of right-wing politics on Irish campuses, or any kind of “alt-right”?

I don’t begrudge people born in other countries wanting a better life, but I don’t think we have an obligation to provide it for them

The alt-right is a fluid term that covers several far-right groups, including white supremacists and neo-Nazis.

It is known for controversial dark humour and often racist or misogynistic online memes. Prominent figures like Richard Spencer in America have sought to brand white nationalism in an online-savvy way that appeals to young white men.

Byrne, who recently finished his degree in politics, says he would be furthest to the right on border control, and would favour a stricter Australian-style system in Ireland. He’s pro-Brexit, pro-Trump, but does not describe himself as alt-right.

“I suppose I was taken by the charisma of people like Farage . . . I don’t begrudge people born in other countries wanting a better life, but I don’t think we have an obligation to provide it for them,” he says.

People in his course have nicknamed him “edgy Dave”, and debates on topics like Islam where his views are controversial can turn into a “lynch mob” against him, he says.

He admits he is a rare Trump supporter on the south Dublin campus. “At a college event watching the US election results, I was one of three students there celebrating Trump winning,” he says.

In the past he says he spent a lot of time online on 4chan, an anonymous discussion forum in one of the controversial corners of the internet popular with the alt-right.

“There are positions you can hold that are in line with the alt-right, without belonging to the group,” he says.

However, he feels the movement has “gotten out of hand” and has been “hijacked by some very reprehensible people”.

Former Libertas founder and entrepreneur Declan Ganley loaned the group €600 to get them off the ground.

Guillermo Dillon, who is a recent classics graduate, was editor of the site during its first year. He says the idea to start the right-wing platform came to him and a group of friends after passing a noticeboard on campus.

“The students’ union was campaigning for a repeal vote, you had People Before Profit having a talk on Marxism, and you had the feminist society having an event on the gender pay gap.

“The entire noticeboard was filled with left-wing ideas but there wasn’t a single poster that advertised a conservative event,” says Dillon.

The vote to remove anti-abortion activist Katie Ascough as president of UCD students’ union in October 2017 was another example that campuses were hostile to conservative viewpoints, he says.

Christine D’Arcy is studying to be a teacher in Dublin City University (DCU), and is involved with the publication.

“We detest the alt-right. In my personal opinion, I would say they are very racist and that’s so far from what we are,” she says.

The Burkean challenges the idea that conservatives were “old white men in suits” and fills a gap on campuses, according to D’Arcy.

The site has expanded from Trinity to set up several branches of writers in most universities, and is funded by online donations.

Luke O’Connor is studying media and politics at DCU, where he says he was “imprisoned” by liberals.

He describes his politics as “economic nationalism” and supports reduced immigration and lower taxes. He is also anti-European Union and attended an “Irexit” conference held at the RDS in February.

Trying to place the roots of his politics, he says “young men are feeling increasingly disjointed in Irish society”.

O’Connor says he would not be too open about his politics on campus, but likes “to court controversy online”.

There is a bias among some university lecturers to more liberal-minded viewpoints, he says, “particularly among the humanities, some of our lecturers seem a bit skewed”.

When it comes to his political home in Ireland, he doesn’t describe himself as a supporter of Fine Gael or Fianna Fáil. “There’s a market for a far-right or a far-left party in Ireland” he says.

Conservative or right-wing voices are also notable for their absence at university events.

In cases where high-profile right-wing speakers have been invited, they have often descended into controversy and protests.

In February, Nigel Farage was invited to speak in Trinity by the Historical Society. The society faced an online storm of backlash and pulled back from its initial decision to award Farage a gold medal for “contribution to public discourse”.

The opposition to Farage speaking at Trinity is similar to “no platforming” movements across colleges in the US and UK, where left-wing students have protested against guest speakers with far-right views.

“We were expecting a bit of a backlash so we were prepared,” former society auditor Paul Molloy says.

“There were a lot of comments from individuals who knew me quite well who then just turned on me. That was surprising.”

It was standing room only at the talk, with a handful of male students sporting red “Make America Great Again” hats in the crowd.

But Molloy says any pro-Trump students in the college would have been in the room.

“I think that’s an overall idea of how many Trump supporters you have in Trinity,” he says.

Last year an event featuring the Israeli ambassador to Ireland Ze’ev Boker in Trinity was cancelled due to security fears, following a protest by Students for Justice in Palestine TCD.

Trinity Provost Patrick Prendergast criticised the protest this August, during a speech delivered to graduates in Jerusalem as part of a visit to Israel, where he said “to wilfully shut down discussion before it has even begun is not – or should not be – the way of universities”.

Seán Egan, an activist involved with the Students for Justice in Palestine group, says it is not correct to characterise the protest as a free speech or “no platforming” issue.

“The Israeli ambassador is a tangible representation of a repressive regime. It’s not about not wanting to hear what he has to say, it’s about showing real solidarity to the people of Palestine,” he says.

However, the deputy Israeli ambassador Orli Weitzman told The Irish Times there was a difference between the students’ actions and respectful protest.

The ambassador “was actually blocked from speaking”, she says.

“It is disappointing in a university especially, where freedom of speech should be most upheld,” she says, adding the embassy would be “hopeful for the opportunity” to speak to students in Trinity on another occasion.